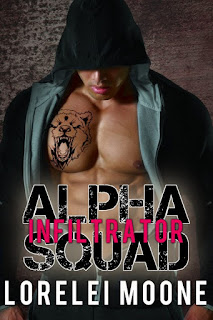 For love or for honor? Sometimes being fated to each other just isn’t enough.

For the past six months, wolf shifter Thomas Blackwood has been serving two masters. He believes in Alpha Squad’s mission to help the newly outed shifter population integrate into human society, and has done his best to contribute to its success. At the same time, he’s been reporting on the squad’s activities to his alpha back home. But everything changes when the squad is sent in to investigate a string of crimes with a pack of renegade wolves right at the center of the case. Suddenly Thomas must choose: follow his alpha’s orders and kill the investigation before it even starts, or remain true to Alpha Squad’s calling and uncover the truth; whether it implicates members of his own species or not.

And that’s not even the worst part: the woman he’s been admiring from afar since joining the squad already doesn’t give him the time of day. What would Private Callahan think of him if she knew he was a traitor?

Private Jill Callahan has been doing her utmost to ignore the one Alpha Squad member who could turn her world upside-down: Thomas Blackwood. From the moment the handsome wolf shifter arrived on base, her emotions have been trying to get the better of her. So in the interest of maintaining her professionalism, she has been avoiding him completely.
When Blackwood starts acting suspiciously, and nobody seems to notice it but her, Jill no longer has that luxury. She feels compelled to investigate what’s really going on and if it ends in heartbreak, then so be it.

Jill and Thomas’s loyalties are tested when they realize why they haven’t been able to shake their attraction to each other. They’re meant for each other, but sometimes things just aren’t so simple. The mission - and the squad - must come first.

Join Alpha Squad in this steamy paranormal romance you won’t want to put down. If you like Alpha City by Bryce Evans or Bear Patrol by Scarlett Grove, then you will love the Alpha Squad Series by Lorelei Moone!


"You're beautiful," he whispered.
The rawness in his voice made her knees weak again. It was like a dream.
She wanted to respond, but she couldn't find the words.
Instead, she tiptoed toward him as he leaned down further, allowing their lips to touch. If the way he'd looked at her just now was the most glorious experience of her life so far, this was a million times better.
Her heart skipped a few beats. The softness of his lips, the tenderness of his touch. Everything about him was beautiful. His kisses promised a surprising gentleness along with a searing passion Jill had never found in another lover.
Like they were made for one another.
She could be shy, nervous even. But with the right man… There was a whirlwind of emotions hidden beneath the surface, yet to be uncovered.
As their tongues touched just slightly, darting around each other in a dance of discovery and wonder, everything changed yet again. Something else happened that Jill had never experienced before.
It was as though she was no longer alone in her head.
Sure, she still had that critical voice telling her to stop what she was doing and run, but it was getting weaker. There was another presence in her mind also. Thomas Blackwood.
Wolf. Warrior. Lover.
Jill opened her eyes and gazed deeply into his. So much to see.
When she wrapped her arms around him and kissed him again, a flood of images entered her mind. His thoughts and emotions.
His memories.
There were glimpses of how he'd watched her. On base as well as on previous missions. He'd been pining for her as she had done for him.
She also saw visions of his home town. Moors and forests that spanned as far as the eye could see.
But along with all these beautiful memories, there was something darker lurking underneath it all. Conversations with his uncle, Eric Blackwood. Secret outings that did not fit into Alpha Squad's mission.
Jill pulled back, her heart beating frantically now, not due to the increasing passion she'd felt for him—though the attraction was even stronger now. No, this was something else. Fear. Hurt.
Betrayal.

Lorelei Moone is an up-and-coming author of paranormal romance based in London. A lover of all things sweet, and caffeinated, when she’s not writing about sexy bear shifters and their strong-willed curvaceous love interests, Lorelei can be found baking cookies or cakes for her family.