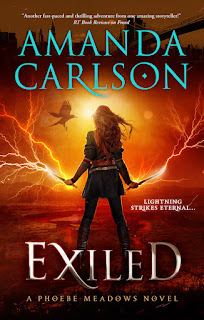 Phoebe Meadows is on trial for her life.

After freeing her half-brother, Baldur, Phoebe is set to stand before the Council in Asgard to answer for her actions. The threat of exile if she’s found guilty looms, not to mention the added stress of meeting her real father for the first time.

Upon entering Asgard, Phoebe discovers new allies in a half-brother she’s never met as well as an oracle who is in possession of valuable information. A little added help couldn’t have come at a better time, because when Phoebe is tossed into an unknown realm, she’s armed only with Gundren, a jewel, and her wits.

When Loki shows up, all bets are off. The trickster god throws a wrench in Phoebe’s plans and kidnaps Fen, her only ally. And just when she thinks she sees the light at the end of the tunnel, Phoebe finds she has to defeat one last obstacle: The Norns.

And they aren't planning to go down without a fight…

Amanda Carlson is the author of the upcoming Jessica McClain series. The first book, Full Blooded, will be released by Hachette Book Group, ORBIT US & UK SEPT 2012. She’s been writing for over ten years. Full Blooded is her first novel. She lives in Minneapolis, with her husband and three kids.