UFI welcomes Author Alexis N. Sage . Thanks for Joining us!!

I am quite manic when it comes to planning and organization, so much so that I actually started designing my own planners and stickers and attend a planner conference each year. If it has anything to do with agendas, I am first in line!

Usually when I can carve out some time for myself I either read, take long baths, or binge Netflix shows. More often than not, I try to cram all three in one night.

Getting to know my own characters. They’ve become like family members in our house, minus the Christmas presents. I treat every character I write the same way I would real people. Getting to know them well first before I introduce them to the rest of the people in my life. Right now, I’m spending more time getting to know Zag from the book, he’s a blast to hang out with!

Of course! I have to start each series with a full timeline breakdown, this way there are no surprises or plot holes in the collection as a whole. From there, I use the three-act process to plot each novel. Once I have that in place, I can move down to the specific scenes. I find that having a structure in place really helps me contain the information and make sure I hit the right beats.

I’m currently obsessing over the Caraval series. It’s such a beautifully written story with incredibly intricate nuances that drew me in immediately. For authors, I will always read anything that Holly Black, Sarah J. Maas, and Sarra Cannon put out. They’re all amazing!


How would you pitch The Enuma Legacies to someone who has not heard of it before?

It’s a story about a girl that gets tangled up in an underground world of elemental deities and discovers that she is not just human after all.


Can you tell us a little bit about the world that AETHERBORN is set in?

The book is set in today’s modern society, in the fictional city of Westerlake. I based the city’s feel on Toronto, Canada. Specifically, the southern most parts of it that are closest to the water. Most of the book takes place between Ruby’s apartment and an underground training center for elementals. It was important to me to have the two opposite sets in order to show a vivid change in Ruby’s life when she discovers the elemental world. The world she found had to be right under the nose of the regimented life she was otherwise used to, a fun surprise in a way. Without giving away spoilers, there will be other worlds built in the series that are planned for later books and I cannot wait to write them!


Do you have a favorite scene in AETHERBORN?

I actually have two. I quite enjoyed the opening scene since it was a great way to introduce Ruby and some of her more fun character traits. The other scene I particularly enjoyed was Ruby and Liam’s first kiss (spoiler alert!), I was rooting for them the entire time that I was writing the previous chapters and could not be happier with how it turned out.

Zag is my most fun character to write for, hands down. He’s just such a fully-developed and interesting character that I can picture myself being friends with him in real life. The hardest so far has been the antagonist that I am introducing in AetherQueen. It took me a long time to develop speech patterns and even physical characteristics for this character. I wanted an antagonist that was dark and quite evil but also entertaining to read and finding that balance was a difficult task.

The entire Enuma Legacies series for now. I am working on six books in total for this series and will be giving it my entire attention. I have already started planning for possible spin-offs of the world but those will have to wait until the series is complete.
__________________________________ 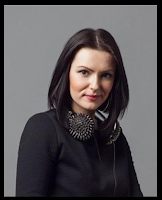 Alexis N. Sage has spent most of her life waiting to meet a witch, vampire, or at least get haunted by a ghost. In between failed seances and many questionable outfit choices, Alexis has developed a keen eye for the extra-ordinary.

Since chasing the supernatural does not pay the bills, Alexis has dabbled in creative entrepreneurship, marketing and retail management. She spends her free time reading thrillers and binge-watching television shows in her pajamas.

Currently, Alexis resides in Toronto, Canada with her husband who is not a creature of the night.

She is a Scorpio and a massive advocate of leggings for pants. 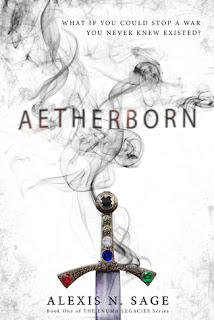 
There is a world of deities living among us. What would you do if you were the only one who could see them?

Ruby Black, a photography student at Westerlake University, seems to have the typical life of an awkward college kid. She has average grades, does not make friends easily, and is secretly in love with her best friend. Ruby is content with her place in the world. In fact, she quite likes it. That is until a simple incident on a packed, rush-hour subway train shatters her entire reality.

Reluctantly, Ruby finds herself in the middle of a war that has been brewing for centuries. A battle between powerful beings that have been living in secret under Ruby’s nose this entire time.

Will Ruby go back to her familiar life or will she choose the brooding stranger who opens her eyes to a world far more mysterious than she'd ever imagined? A world where her own powers are far greater than she could have known to be true...


Literally the Worst Train Ride Ever