UFI welcomes Christina Henry Author of Black Wings and Black Night. Thanks for Joining us!! 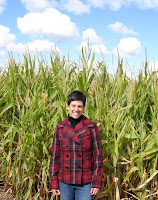 When I am sick or feeling bad, I like to watch “Jaws”. Seriously. It’s like comfort food to me.

I have a five-year-old, so downtime is kind of a distant memory, but I occasionally have time to read a book or watch a movie.

I’ll read just about anything. My favorite movies are ones where monsters eat people up – “Night of the Living Dead”, “The Host”, “Alien”, “The Thing”, things like that.

Working in my pajamas!

I usually make up a playlist for each book. Over time that playlist will come to epitomize the emotional feeling of the book to me.

Other than that, I just try to write as much as I can in the time that I have. Sometimes I write by hand in a notebook and sometimes I work directly on my laptop.

If I’m writing in the notebook that usually means I’m out somewhere with my son. I wrote over 100 pages of BLACK HOWL by hand over several days while he played at various parks around the city.

I love, love, love Jim Butcher. I think he is such a brave writer. He takes incredible risks with his character Harry Dresden. And he’s really got the balance of humor and suspense down.

How would you pitch the Madeline Black series to someone who has not heard of them before?

Madeline Black is an Agent of death, which is basically a crummy unpaid job that you inherit when another Agent in your bloodline dies. Agents escort souls after death and give them the choice of entering the Door (no one knows what’s behind it) or staying on earth as a ghost. Maddy’s mother died under mysterious circumstances when she was young and her father was missing her whole life, so she was raised by a very mouthy gargoyle. In BLACK WINGS, Maddy discovers that deaths are occurring outside the natural order – that is, not predicted by the seers that give Agents their soul-escorting assignments. While investigating the causes of these deaths she discovers a very unexpected supernatural heritage.

Can you tell us a little bit about the world that Madeline Black series is set in?

I wanted the world to cleave pretty closely to the real world, but with paranormal elements thrown in. It’s set in Chicago, my hometown of the last eleven years, and it looks pretty much like the real Chicago, except that freaky supernatural things keep happening under the radar. Ordinary people don’t know about Agents of death or talking gargoyles, so keeping monsters out of the path of innocents and out of the headlines can get pretty tricky for Maddy.

Do you have a favorite scene in Black Night?

Usually any scene with Beezle is a favorite. He’s so easy to write.

Beezle is one of my favorite characters. Where did the Idea of him come from?

Beezle is easily my favorite. J.B. can definitely be a challenge because his relationship with Maddy is so prickly.

I’ve got some other ideas but I won’t be working on them anytime soon. I’m under contract for six books in the Black Wings series, so there’s nothing but Maddy for a while! 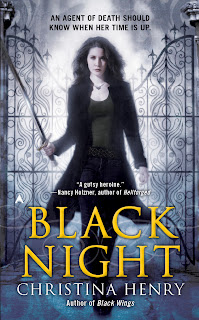 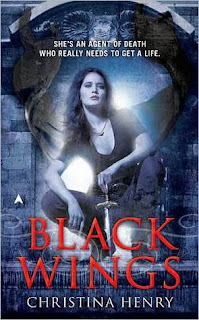 
As an Agent of Death, Madeline Black is responsible for escorting the souls of the dearly departed to the afterlife. It's a 24/7 job with a lousy benefits package.

Maddy's position may come with magical powers and an impressive wingspan, but it doesn't pay the bills. And then there are her infuriating boss, tenant woes, and a cranky, popcorn-loving gargoyle to contend with.

Things start looking up, though, when tall, dark, and handsome Gabriel Angeloscuro agrees to rent the empty apartment in Maddy's building. It's probably just a coincidence that as soon as he moves in demons appear on the front lawn. But when an unholy monster is unleashed upon the streets of Chicago, Maddy discovers powers she never knew she possessed. Powers linked to a family legacy of tarnished halos.

Powers that place her directly between the light of Heaven and the fires of Hell...

Winner will receive
- One copy of Black Night
*Provided by ACE

RULES
1)  Leave a comment or question for Christina =)
2) This giveaway is open to US and Canadian readers only
3) Must leave an email address so I can contact you.

Giveaway Ends 8/15/2011 at 10pm EST
Winner will have 48 Hours to reply to my email or I will pick another
Winner chosen randomly with the help of random.org
Posted by StacyUFI at 3:00 AM 17 comments: