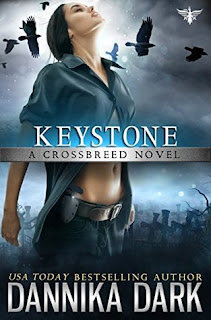 Raven Black hunts evildoers for fun, but her vigilante justice isn’t the only reason she’s hiding from the law. Half Vampire, half Mage, she’s spent years living as a rogue to stay alive. When a Russian Shifter offers her a job in his covert organization hunting outlaws, dignity and a respectable career are finally within her grasp. The catch? Her new partner is Christian Poe - a smug, handsome Vampire whom she’d rather stake than go on a stakeout with.

They're hot on the trail of a human killer who will stop at nothing to get what he wants. One misstep during her probationary period could jeopardize Raven’s chance at redemption, and her partner would love nothing more than to see her fail. Will Raven find the courage to succeed, or will she give in to her dark nature?

Dark secrets, unexpected twists, and a blurred line between good and evil will keep you on the edge of your seat.

Crossbreed is a powerful new Urban Fantasy Romance series that will captivate your imagination.
Immortals live among us.


I had only read one of Danikka Dark's previous books and really enjoyed it, but for some reason I have not jumped into anything else of hers. When she reached out to me to see if I would be interested in reviewing her new book KEYSTONE, I looked it up and decided it sounded interesting enough that I wanted to give it a try. I wasn't aware that the Crossbreed series is a spin-off of the Mageri series until after I was done reading it, but I didn't feel like I was missing anything, so if you are new to Dannika Dark's books, I say jump right in.

Raven comes off tough, independent, bad-ass and confident, but you quickly realize she is really lonely, has plenty of flaws and she has a vulnerable side to her as well. When she has the chance to join Keystone, she is both apprehensive and excited. Her time there is anything but smooth and proving herself to be part of the team is harder than she expected. Raven is the main character, but let me tell you, all the other characters are just as entertaining and part of the story as her. Each team member brings their own unique skill set to the team and without one, the others couldn't do everything that they do. I loved watching them work together and I really felt that they were a family.

There isn't really any romance in KEYSTONE, but there is a connection that I wish would have been explored more. Raven and Christian had a love-hate relationship that could totally be a hot romance if they were allowed to explore things. I have to say that them not being able to and Raven not wanting to in the end really bummed me out. On the other hand, this character came off as a really big asshole sometimes and a man slut on top of that, so maybe it's a good thing? I guess we will find out in future books.

I will totally be reading more of the Crossbreed series. I enjoyed everything from the characters to the world and the story line. I look forward to watching them all grow and I think I might jump into some of Dannika's backlist books as well.