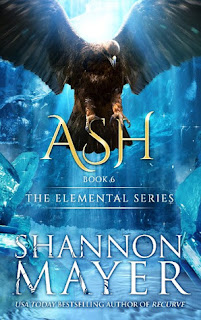 My name is Ash, and I am an Elemental.

As an Ender, it is my place to protect the royal family at all costs. Despite being the best Ender our world has ever beheld, I have failed time and again as the personal sacrifices continue to mount.

Lark has been banished to the desert by her father who is blind to the manipulation he has again fallen prey to. To bring about justice, I must seek out and destroy the one who intentionally wields her powers to bring pain to my people.

Cassava’s death will finally free us from the dark cloud her reign of terror has surrounded us in. This is what I believe to be true and I will seek her out with only one intended outcome.

The reality, however, is much more complicated than my beliefs.

When lies turn to truths, and enemies to allies, can I still find my way back to who I once was? Uncertainty makes me hesitant, but I can not give up.

For justice. For Lark.

No matter the sacrifice.


I was definitely left wondering what all happened to Ash between WINDBURN and ROOTBOUND, so ASH was a welcomed addition to my review schedule. Fans of the Elemental Series might be tempted to read ASH before ROOTBOUND, but you should read the series in order of book #, so make sure to read ASH after ROOTBOUND. I know it's a bit confusing, but there are things that happen in ASH that need the explanations you get from book five.

ASH answered a lot of questions for me, but also added some new ones to the list. She also throws some major curve balls when it comes to Cassava—like you will totally question everything you have thought about her curve balls. I also want to say that I loved the new character addition of Norm in ASH. I see big things coming from him in future books. Rylee would totally love him if she ever met him!

I am glad I got a view of events from Ash's POV and I look forward to seeing him and Lark together again. I'm ready for SPIRIT SOWN.

I gave it 4/5 stars
* This book was provided free of charge from the publisher in exchange for an honest review.
Posted by StacyUFI at 3:00 AM No comments: