Interview + Giveaway: Eat The Ones You Love by J.L. Murray

UFI welcomes Author J.L. Murray. Thanks for Joining us!!


I was a bit of a wild child in my youth, which fuels a lot of my fiction. Lots of punk rock shows and (ahem) various illegal activities. But now I’m very happy to stay at home. My husband tells me that it’s funny that I write such dark, creepy books because I am very cheerful and happy in real life. I honestly think it makes him kind of nervous that I write about such violent things.


I don’t have a lot of down time. I’m always working on something, even if it’s just an idea blooming in my head. I’m an indie writer, so I’m usually doing some sort of marketing when I’m not actually writing. But sometimes my books are hard on me, mentally and physically, so I have to take a step back and take care of myself. I live in Eugene, Oregon, which is a great place and things are always going on. There are a lot of bike and walking paths and I usually try to make up for sitting in a chair three months at a time by exercising. I read a ton of books, and even on writing days I’m reading. That’s something that never stops and never gets old.


There’s this sort of hypnosis that happens when you get really into writing a book. You forget where you are, who you are, and you’re just in that moment, in that universe. That’s my absolute favorite thing in the world, I think. Just getting lost. You lose track of time and then the sun is going down, and you blink and say, “Oh yeah, reality.”


Coffee is necessary. We buy the really dark, oily beans and grind them. It’s basically espresso by the time we’re done. And I make these playlists for each book, so I hear the playlist and instantly my brain understands that it’s time to get down to business. Besides that, not really a routine. I word best in a quiet house, so I usually take most weekends off. And we recently bought a house that’s hidden from the road and surrounded by trees, so it’s sort of like I’m in my own little world. It’s very beneficial for writing.


I read so many genres so liberally, that it’s hard to pin down just urban fantasy. I recently read Station Eleven by Emily St. John, which was really good. I like China Mieville and Neil Gaiman and Ray Bradbury. But the author I have total hero-worship for is Margaret Atwood. I know she’s not really considered a genre writer, but I just find her so amazing. I can get lost in one of her books and just forget all time and place.


How would you pitch The Thirteen to someone who has not heard of it before?


Basically, when I decided I wanted to write Jenny Undead, the first book (the second book, Eat the Ones You Love, just released this month), I thought, ‘what if the zombie was the hero?’ And things sort of spiraled out of control from there. So I guess I would say, it’s like Beyond the Thunderdome with science and zombies, from the perspective of the zombies.


Can you tell us a little bit about the world that The Thirteen is set in?


Jenny Undead opens in a world ten years after the government collapses, after the zombie apocalypse has destroyed everything that anyone holds dear. In the first book, Jenny is just sort of this happy post-apocalyptic girl. She’s got boyfriend that adores her and she’s mostly okay with the way the world is. She’s accepted it. No one really messes with her because she’s got this tough group of friends. But as time goes on, she really sees the brutality of what humans have become. There are these markets called Expos, where everyone can trade, and everyone (seemingly) gets along there. There are rules and it’s generally considered a safe place open to Heathens from all walks of life. There are also the Righteous, who sort of stick together and have all these strange cultish settlements everywhere. They’re very secretive, and very exclusive, and they don’t accept the outside world as a proper place to be. And then you have the Dregs. These are people that have rejected everything else. Dreg camps are places to trade “on the black,” and are full of child molesters, drug addicts, prostitutes, and people that don’t want to follow the rules of the shaky bits of society that humans have managed to build up.


All in all it’s an incredibly brutal world, and Jenny ends up having to get brutal herself to survive.


Do you have a favorite scene in The Thirteen ?


My favorite scene will always be this moment in the first book, Jenny Undead. Jenny has been infected, but somehow hasn’t turned into a full on zombie, or “rotter.” She’s kept her mind and has met up with a group of other people that have become the same. Dead but still thinking and feeling. She’s left her friends and her lover, Declan, and they think that she’s probably dead, or a zombie somewhere. There are a few scenes where Jenny spies on Declan to see if he’s okay, which he is definitely not. His grief has driven him a little crazy. And then there’s this scene where he finally sees her and she looks at him and he knows that she’s alive. He knows she’s dead but also isn’t dead. And this feeling of utter shock and pain and relief and confusion paralyzes him.


The scene is the whole reason I wanted to write this book. I wasn’t really into zombies, but when this scene popped into my head, I knew I had to write it. Jenny spends the whole time before staying away from Declan and making sure he thinks she’s dead so she doesn’t hurt him, and then this one moment just blows everything out of the water. It’s at that point that you know that Declan is going to find her. It’s still very emotional for me to think about it.


Faron, from Eat the Ones You Love, was really fun to write. He’s kind of psychotic, but he has this manic energy that just livened things up like an electric shock. I loved writing his scenes because he just ended up stealing every single one. Trix, too, was fun to write. She has a mouth like a sailor and just said everything everyone was thinking. She was a lot of fun.


Jenny and Niki Slobodian (from my UF series) were hard to write, not because their scenes were particularly difficult, but because I identified so strongly with them both. I felt their emotional pain like something physical deep in my chest when I wrote them. Especially Jenny. Niki always had it rough, but Jenny started out as this sort of happy, cheerful person. Things got pretty bad, pretty fast, and that was hard because you could see how good she had it before. In Eat the Ones You Love, there’s a prologue that shows how over the moon she and Declan were when they first met, and it hurts, because life gets so deeply disturbing for her.


Right now I’m finishing up a sort of gothic dystopia with vampires called Blood Day. I’m hoping to get that out by the end of the year. I’m putting out a new series called Blood of Cain after that, the first of which will be called Monstrous. It’s a dark urban fantasy about a woman that’s brought back from the dead to murder the murderers that are descended from the bloodline of Cain (yes, that Cain, from the bible). And then, of course, there will be more in The Thirteen series. I just have to recover from Eat the Ones You Love first. It was a difficult one to write, and I feel a little battle worn. It’ll pass.
__________________________________

J.L. Murray is the author of the Niki Slobodian series (Between the Devil and the Deep Blue Sea, The Devil Is a Gentleman, Before the Devil Knows You're Dead, The Devil Was an Angel, and The Devil's Backbone), The Thirteen series (Jenny Undead and Eat the Ones You Love), After the Fire, and the highly anticipated upcoming series Blood of Cain (Monstrous).

Murray is a firm believer that horror can be beautiful, and that good and evil are very far from black and white. She lives with her family in Eugene, Oregon and can be reached through her website at www.jlmurraywriter.com. 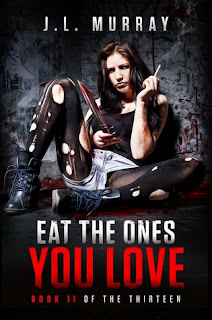 Eat The Ones You

Jenny always lives to fight another day. But she’s not so sure she wants to. She saved Declan, and he hasn’t come back quite right. And after meeting a group who call themselves The Thirteen, Jenny is convinced that she would be better off on her own.

But when the group is attacked at her mother’s old bunker, Jenny wakes up to find her little undead family in tatters, the newcomers gone, and one of her friends missing. If she wants to find him, she’s going to need to talk to someone she’d much rather kill: her mother. In the process, Jenny finds that she has a much larger family than she thought.