UFI welcomes Dana Michelle Burnett Author of Once. Thanks for Joining us!!


Turning the Normal into the Paranormal

First off, thank you so much for having me on the blog!  I love having the chance to meet new people and introduce myself and my work!

I write about the paranormal, all those little things that go bump in the night or give you cold chills. Yep, that’s me, bad dream giver extraordinaire.

I love the paranormal, but what I love most is that the paranormal can take places in such normal places.  That gives an extra scary element to it all because it could happen anywhere, even your own hometown!

In my new Gypsy Fairy Tale series, I brought the paranormal to the small Indiana town of Corydon.  It’s not the first time that a scary tale of mine has taken place there, but this time instead of a ghost out for revenge, it’s immortals in hiding.

To me, Corydon was the perfect setting for Once.  I needed a place that I could easily bring to life, but that could be anywhere in the country.  My main character, Harmony, exists in this small community, struggling to make ends meet and overwhelmed with trying to make some sort of life for herself.  That is the normal part of my stories; everything else is a leap of faith into the unknown.

In Once, a carnival of Irish Travellers comes to town, but they hide a secret within their closed group.  Hiding among them is the Tuatha De Danann, the immortals of Irish legend and fairy tales.  When Harmony falls for one of Tuatha De Danann, she is thrust into a world of ancient enemies and magic.

To me, a great paranormal tale has a taste of reality in it that makes you think “this could happen”, even though deep down you know it couldn’t.  That is the magic of any book. 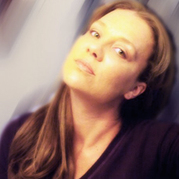 Dana Michelle Burnett spent most of her life writing short stories and sharing them with family and friends. Over the years, her work was published in numerous commercial and literary magazines  including Just Labs, Mindprints: A Literary Journal, Foliate Oak, and many more.  Her short story John Lennon and the Chicken Holocaust was include in The Best of Foliate Oak 2006.

Dana Michelle's Spiritus Series introduced the idea of a ghostly romance and became a Kindle bestselling series.  She's an avid reader of anything dark and romantic.  Dana Michelle lives in Southern Indiana with her dancing diva daughter and an assortment of pets. 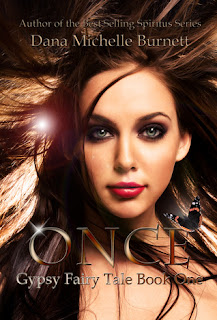 
The bumpy dirt road leading out to old man Macready’s farm was dark, but still I turned off my truck’s headlights and slowed down to a crawl. I leaned forward and peered out at the darkness, squinting to see anything at all.

I could feel Kieran watching me from the passenger seat. I didn’t turn to see his expression, but I could feel him near and close.

“What?” I whispered without taking my eyes off of the road.

“I get the feeling that we’re not supposed to be here.”

“You would be right,” I said with a laugh. “A bunch of us kids used to come out here back in high school and more than once he chased us off.”

Kieran laughed as well and moved closer on the seat, “How would he chase you off?”

“He’d shoot at us with bird shot,” I said glancing over at him and just being able to make out his shocked expression.

I pulled the truck to a stop just as the road ended. I shut off the engine and got out, standing in the tall woody weeds.

“The pond is just on the other side of the trees,” I said as Kieran came around the truck.

Not giving myself time to think about it, I reached over and took his hand and started walking through the trees.

Easy Harmony... It’s just his hand... You’re just showing him the way... It doesn’t mean anything...

Despite the conversation in my head, I still trembled as our fingers intertwined. I didn’t look back at him, but I held his hand a little tighter.

“When I graduated from high school, and everyone else went off to college, I used to come out here by myself before Grandma got so bad.”

“What was that like? Coming out here all alone?” Kieran asked as he followed close behind.

“It was,” I said. “Have you ever noticed you never see butterflies that much anymore? I miss them.”

Kieran pulled at my hand to stop me just as we reached the edge of the trees.

“Is something wrong?” I asked as I turned around.

“No,” Kieran said as he took my other hand as well and then tilted his head back and closed his eyes. “Just wait.”

Suddenly, into the air rose a cloud of orange and black butterflies. They fluttered all around us, landed on my arms and shoulders.

I looked at him amazed, “How did you do that?”

Kieran stepped forward and brought his lips down on mine in a feathery soft kiss. When I opened my eyes, the butterflies were gone.

The Stone Demon (The Iron Witch, #3) by Karen Mahoney
Moonset (Legacy of Moonset, #1) by Scott Tracey