UFI welcomes author Lauren Dawes. Thanks for Joining us!!

My top five urban fantasy/paranormal romance authors and how they’ve influenced my writing.

Hi everyone. It’s Lauren Dawes here, author of the Dark Series. First of all, I’d like to thank Urban Fantasy Investigations for having me on as a guest blogger! I love being asked to guest post since there are so many things I can write about. Today I thought I’d share my top 5 urban fantasy/paranormal romance authors and talk about how they inspired me to improve my writing.

I was a bit of a late bloomer when it came to reading. I used to read a lot when I was younger, but then I suddenly didn’t have time for it anymore. I hate to admit it, but Twilight was the series that threw me back into reading. Yet after finishing that and feeling unsatisfied with the level of blood-letting and violence these Fawkes vampires were involved in, I discovered the authors I’ll be talking to you about. Each and every one of them has shown me the different elements that need to exist in a great urban fantasy book.

So, without further ado, here they are…

5. My number 5 author is Laurell K. Hamilton for her Merry Gentry series. Her Anita Blake: Vampire Hunter series is by far the most well-known and quite possibly the more popular, and I enjoy the first 5 or 6 books, but her Merry Gentry series definitely resonated more with me. Hamilton’s imagination is what really drew me into her books. From her characters to the construction of her scenes, I’m constantly floored by the way her mind works and how everything slots in so well together. I’d really love to be a fly on the wall during one of her brainstorming sessions for a new book. In each of my series, I strive to come up with an idea that hasn’t been touched on before – something to make me stand out from all the others like Hamilton has done – and I think I’ve done that with my Dark series, where Norse gods and Valkyries have been forced into the human world by circumstances out of their control.

4. In at number 4 is Larissa Ione for her Demonica series. What I really admire about Ione is her world building abilities. In this series, she creates a place where all injured demons, vampires, werewolves and a hundred other supernatural beings can go to get healed. Underworld General Hospital is hidden from humans, yet it’s fully immersed in the humans’ world at the same time.

Writing in the urban fantasy genre requires quite a lot of imagination to create a believable world, and Ione delivers with this series. When I begin writing, I spend a lot of time thinking about the world my characters live in. I want it to be a familiar place for the readers, but I also want it to be a layered, unique place for my non-human characters to live in too.

3. My number 3 author is Gena Showalter for her Lords of the Underworld series. Showalter takes third place for her characters in this series. The premise behind it is amazing. A lot of other authors have written about Greek gods, but I love Showalter’s interpretation and creation of a world where the demons from Pandora’s Box have escaped and now inhabit the bodies of the protagonists – the ‘lords’ of the underworld.

We follow Showalter’s characters in their development from the beginning of the book to the end, seeing what external events or people have influenced that transformation. These characters are not one-dimensional at all. They have their flaws just as humans do. Some have integrity, some don’t. Some have a conscious, some don’t. In the end, that’s what makes a great character – flaws and all. I try to make all of my characters like this. They’re not perfect, and if they were, I doubt they would be relatable. Some of my favourite from my Dark Series are Loki and Darrion. These are the perceived ‘bad guys’, but once the events from their past are understood, I’m hoping many more people will end up liking, if not feeling sorry, for them.

2. Coming in at number 2 is Rachel Vincent’s Shifters series. It follows a head-strong werecat named Faythe through personal crisis and tragedies involving her entire Pride. I’m currently re-reading the entire series for the fifth time. It’s the plotline and the continuation of that plot that really hooked me when I read it for the first time, and it’s no different this time around. From the very first book, you can see what the eventual ending is going to be, but the Faythe in book one would not be ready for the events that occur to the Faythe in book six. Through a strong plot, Vincent helps Faythe to get there in the end, to build her into the person she needs to be through events often out of her control.

Rachel Vincent’s influence on my writing is to really focus on developing my plot well. Whether I’m writing a stand-alone novel or a 4-5 book series, it’s important to give my characters that opportunity to learn and grow through the entire book. When I was writing Dark Desire the plot often changed, and I think it was for the better. It meant that one of my protagonists could finally have their revenge when I’d originally plotted it differently.

1. And finally, in the number 1 place is J.R Ward’s Black Dagger Brotherhood series. I’m sure there are hundreds, perhaps thousands of other authors out there who attribute Ward to inspiring them to write, and I am no different. I love this series because it has everything I could ever want in a book: amazingly well-defined characters, a world which slots into ours so perfectly (as all good urban fantasy books should), a plot which develops and grows with her characters and a stack of imagination.

She took the idea of vampires and put her own spin on them. I also adore her writing style. It’s distinct and seems to draw you right in from the beginning. Each character has an easily identifiable voice and vocabulary, which helps their personality to come through.

With each book that I write, I try to keep these few key things in mind. When it came to the Dark Series, I wanted to have some characters that people would both hate and love, but always relate to and understand. I chose to set Dark Deceit and Dark Desire in Boston after a visit to the city on my honeymoon. With all the history it had, it just seemed like the perfect place to set an urban fantasy novel. If you really love dark urban fantasy, a gritty storyline and intriguing characters, you don’t want to miss out on my Dark series.

Lauren Dawes is an urban fantasy/paranormal romance writer and the author of the Half Blood Trilogy. You won’t find any friendly vampires in between the pages of her books; just blood, teeth and violence. When she’s not writing, she’s reading or teaching. She currently lives in Victoria, Australia with her husband and cat. 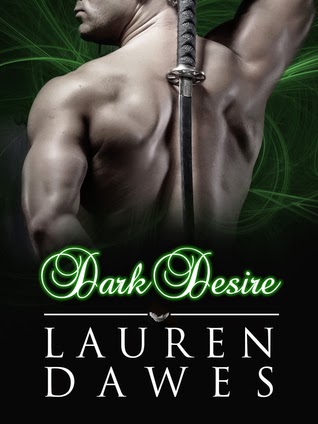 
The time of Odin is over. The Aesir gods now live among the humans in their bustling modern cities. Their brutal dominion over the other gods and their eradication of the entire dark elf race may have ended, but their actions have not been forgotten.

With the death of Adrian still haunting Taer’s every waking breath, she dreams of getting revenge on the dark elf responsible for her brother’s murder. But when the one person she’s depending on to train her in the art of weaponry refuses to help, she has no other choice but to get instruction from the most unlikely of people. Driven by an undeniable desire, Taer finds herself learning more than just how to fight.

Eir, the goddess of healing, has had her spirit destroyed with the death of her twin at the hands of a deranged god. Still struggling with her loss, she is merely surviving each day. That is until a chance encounter with a human shows her that her broken heart can be mended in the simplest of ways.