Review: Shadows in the Silence by Courtney Allison Moultan 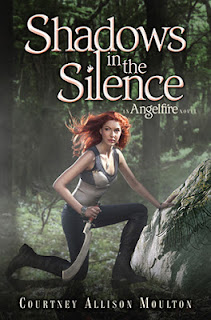 Your strength in heart and hand will fall. . . .
Ellie knows that the darkest moments are still to come, and she has everything to fight for:

She must fight for Will.
The demonic have resorted to their cruelest weapons to put Will in mortal danger, and Ellie makes an unlikely alliance to save him and to stop Lilith and Sammael, who seek to drown the world in blood and tear a hole into Heaven.

She must fight for humanity.
As the armies of Hell rise and gather for the looming End of Days, Ellie and her band of allies travel to the world’s darkest and most ancient regions in her quest to come into her full glory as the archangel Gabriel.

And Ellie must save herself.
Her humanity withers beneath the weight of her cold archangel power, but Ellie must hold tight to who she is and who she loves as she prepares for the ultimate battle for Heaven and Earth.

In this final installment in the Angelfire trilogy, Courtney Allison Moulton brings her dark world of epic battles and blistering romance to a blazing bright conclusion.

There is not much you can say in a final book of a series without giving away spoilers. SHADOWS IN THE SILENCE was just as good as the previous books in the Angelfire series. We know who Ellie is, we know who the players are, and we know what needs to happen to bring the fight to an end. Book 3 did a great job of tying everything together a final time. We get the final character development information for all of our favorite characters and get to meet some new ones we weren't expecting. Certain characters learn to get along and let the past lie. The final show down was well written, I really liked how everyone came together to fight for what they believed in. I felt like I was in the thick of the action and everything played out believably.

You should laugh, cry and scream plenty of times while reading. If you enjoyed the first two books you will be happy with how everything turns out. After all was said and done I was satisfied with the ending of the series.