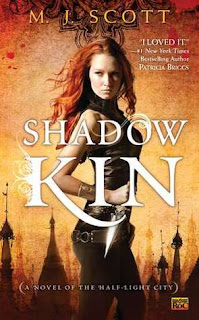 
On one side, the Night World, rules by the Blood Lords and the Beast Kind. On the other, the elusive Fae and the humans, protected by their steadfast mages...

Born a wraith, Lily is a shadow who slips between worlds. Brought up by a Blood Lord and raised to be his assassin, she is little more than a slave. But when Lily meets her match in target Simon DuCaine, the unlikely bond that develops between them threatens to disrupt an already stretched peace in a city on the verge of being torn apart...

Another fabulous cover that reeled me in. Lily is a wraith. She is hated by every Fae because she is a wraith and feared because she is the assassin slave to Lucius. The day Lucius sends Lily out to kill a human named Simon everything in Lily's life changed.

The world that Lily grows up in has made her think very little of herself so she keeps to herself, doesn't show any feelings and kills who and when she is told to. She is sent out to kill Simon and when it doesn't go as planned he is the first person to treat her like she is someone worth knowing. The story switches back and forth between Simon and Lily's POV. It was easy to keep up with things and it only added to the story to read what either person was feeling about things at the time. I was happy with the way the story progressed at most points but i found the middle to be a tad bit slow. There was times where I wanted to yell at one or the other for not understanding the other better but that is all part of a great story. The emotions came across well. Simon and Lily had great chemistry. There is a great mixture of paranormal creatures. The world that the story takes place is well described. SHADOW KIN lived up to its cover and I will be picking up book 2 BLOOD KIN in June so I can continue the story.