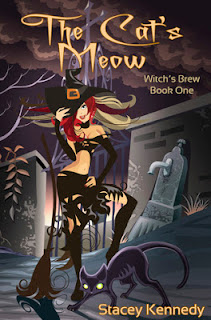 Libby is an Enchantress—a witch gifted by the Goddess to conjure spells. When a magical presence is detected around a recent string of feline slayings, Libby takes the case to uncover the reasons behind the odd deaths. Much to her displeasure, the coven also sends a sexy warlock, Kale, to assist her.

While having the muscle around proves to be useful, fighting the attraction between them is worse than a hex, especially considering Kale is keeping secrets. But soon, Libby has bigger problems than the elusive warlock when her spells turn up clues that point to something far more sinister than slaughtered cats.

Now Libby has landed herself in the midst of an uprising. She trusts no one and isn’t safe—not from the warlocks stirring up trouble. Not from the worrisome rebellion she can’t escape. And certainly not from Kale, who is weaving a very dangerous spell over her heart.


I have to admit the cover and the title didn't interest me and I passed up the title a handful of times on Netgalley before I read some reviews and decided to give it a try. I am so glad I decided to read THE CAT'S MEOW.

THE CAT'S MEOW is a fun easy read with a huge amount of action. The characters are very real feeling and were huge entertainment to follow. Libby, my gawd the sass she brings is fantastic. She is pretty hard headed in some things but she grows by the end of the book and she really has much reason to feel the way she does about things. Her mouth definitely should get her in more trouble then it does though. Kale is a sexy alpha male. He is very closed off at first and remained elusive in his non answers to everything for pretty much the whole book but he is extremely protective of Libby and you cant help but love him just for the things he does. I had a feeling I knew who he really was from pretty early on but the reveal was just as fantastic as it would have been if I hadn't suspected as much. The romance is steady, Libby and Kale made a lot of sense together and I really enjoyed their journey to get to know each other no matter how rocky it ended up being.

The ending wrapped everything up really nicely but left it open for book 2. The only question I have left is When does book 2 come out?