UFI welcomes Author Christine Church . Thanks for Joining us!!


Scotland has been in my blood since I was young, and in 1992, I was finally able to see the country I loved, when I flew over there to “live with” a male friend in the late 1990’s. At that time, I was writing a vampire novel about a woman named Kesi who was an ancient hybrid human/God blood drinker (it’s less complicated than it sounds) who was “collecting” who she considered the ‘perfect’ humans to turn into vampires so she could have a vampire family. Wolfe Stewart (the journal writer in Blood Moon), though not one of Kesi’s “children,” played a role in the whole of the story.

That novel sat for decades until, in 2015, I decided to revamp it (pun intended), tear it apart and make something completely different out of it. That is when I got the idea to have Kesi tell her own story. As she lived way back thousands of years ago in ancient Egypt, I knew these couldn’t be just any journal entries written in some store-bought leather journal with flowers on the cover; they’d have been written on scrolls and be so old as to barely be readable.

That is when I got the idea of “duping” the public by making Kesi’s story seem like “real” documents discovered by an archaeologist, hidden in the sands of Egypt, then restored, translated and published. Something no one else has ever done.

Of course, I never actually duped anyone into thinking these were real. But, I have had a number of reviewers write that they definitely read as being real, and that’s good enough for me.
After Book One, I received a lot of feedback from readers wanting to know more about Kesi’s background and her family, so for Book Two I did a Prequel, taking the reader all the way back to the beginning, long before even the pyramids were built.

Many readers showed a big interest in Wolfe Stewart and Fergus MacGregor (a mute vampire? Whaaa…?), who have a chapter in book one, Sands of Time. Since I was trying to publish these books by chronological date, and since book one actually ends (as a to be continued) in 1789, I went back a bit to 1692 and told Wolfe’s story for book three, Blood Moon: Diary of a Highland Massacre.

So far, that book seems to be everyone’s favorite. But, book four, Love’s Tragedy, is now out and continues where book one left off in 1789 France.

Can you tell I love history?

Most of the books in this series are novellas, because the journal entries (all “discovered” in various locales, translated, published) are straight and to the point writings of the character’s journey and how they were “made” vampires and where they will fall on the timeline of this series.

Going forward, as more vampires are made and introduced, the characters will begin to mesh in interesting ways (such as in attempting to locate and take down Yin) and will come together more and more. So, I guess you can look at the series so far as a sort of “intro” to the characters before the big story (which has been merely introduced), which will involve everyone and take interesting twists and turns as characters come and go and try to live their lives within the confines of their individual circumstances. And of course in the center of all of it is Kesi Akhede… and with her at the helm, no one can ever guess what’s going to happen next (not even me)!

Writing has always been in Ms. Church's blood. At age 9, she wrote small picture books, taped them together (too young for staples??) and even gave them a publishing house name (Church Books; what else?). To this day, those ‘books’ sit in storage somewhere. In school, Church could be found in the back of the classroom, writing short stories (and still managing A's in English and Art).

Church's first book, House Cat (non-fiction) was published when an editor who rejected it left the publishing house and the new editor chose Church’s manuscript proposal from the previous editor’s pile of 200 rejected manuscript proposals, and saw it to publication (plus a Revised Edition 7 years later, which is still on the shelves). From there, Church received offers from Animal Planet (when it was still about animals) and more book assignments. Her book Indoor Cats won the 2001 Iams Responsible Cat Ownership Award.

After working for years honing her fiction skills, Ms. Church made the decision to write a novella, a brainstorm idea introducing a brand new, conceptual and innovative vampire series in a way never before done. As a no-name in fiction, this was a big, bold move. With no cash, no job (on disability), she put the book out all on her own; writing, editing, cover design, formatting, everything. Though far from perfect, this was a big step and a big dream. 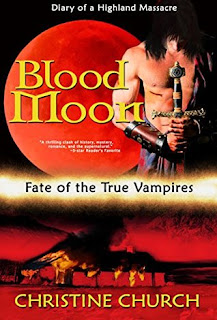 Blood Moon: Diary of a Highland Massacre
Fate of the True Vampires #3
Amazon

Despite his own incongruous past, all Wolfe Stewart wants is a simple life, free from the persecutions of the Crown. And when he rescues a Child of the Mist from an “Asian man who disappears into the snow as if he were never there,” Wolfe has received his wish. But mysteries still plague him. He gets no answers, but more questions when a familiar yet strange man, Captain Campbell, arrives with his cousin and Regiment soldiers to take up the hospitality of the MacDonalds of Glen Coe for a fortnight.

Little did the clan suspect what would soon befall them. After the massacre on 13 February, 1692, most MacDonalds lay dead, many exposed to the elements perished, homes burned. Wolfe and his friend Fergus are taken away for reasons unknown.

But why would Campbell and his men commit such a hideous and unholy crime? The truth will not be found in history books. The beast behind this tragic night holds nothing but greed within his heart, and using the Jacobite risings as his cover, he gets what he wants and leaves behind death and suffering.

A dreary gray mist settled over the Glen, the distant peaks of the Three Sisters Mountains concealed beneath a deep fog that obscured the landscape. However, the weather never kept us young lads from a bonnie game of shot-put in the field. The chill air felt faint against my flesh, though I was donned only in my féileadh-beag, boots and a linen sark.
My shoulder ached from tossing more than my weight in large stones, yet still I was in the game. I lifted quite a bonnie rock, and ignoring the pull in my shoulder, I drew my arm back. Afore I could toss, however, a far-off eerie cry startled me. The boulder landed with a hard thud in the weeds, barely missing my toes.
“Mhac Na Galla!” I cursed, leaping out of its way.
The call sounded once more.
“Wha’ is that?” I asked, rubbing my shoulder and stretching my arm to take off the ache.
“I dinna ken,” said Ian, who stepped up beside me, listening.
“A wolf?” asked Fergus.
Colin weighed in. “An adventure!”