Early Review: A Sliver of Shadow by Allison Pang 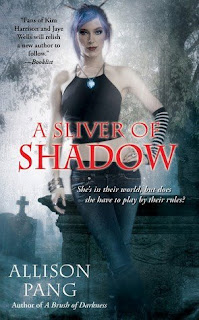 Just when her new life as a TouchStone – a mortal bound to help OtherFolk cross between Faery and human worlds – seems to be settling down, Abby Sinclair is left in charge when the Protectorate, Moira, leaves for the Faery Court. And when the Protectorate’s away…let’s just say things spiral out of control when a spell on Abby backfires and the Faery Queen declares the Doors between their worlds officially closed.

The results are disastrous for both sides: OtherFolk trapped in the mortal world are beginning to fade, while Faerie is on the brink of war with the daemons of Hell. Along with her brooding elven prince Talivar and sexy incubus Brystion, Abby ventures to the CrossRoads in an attempt to override the Queen’s magic. But nothing in this beautiful, dangerous realm will compare to the discoveries she’s making about her past, her destiny, and what she will sacrifice for those she loves

A SLIVER OF SHADOW seemed to read a bit different then book one. I think maybe because a large portion of the book took place in Faery. The plot was pretty big and a lot of things happen in a short amount of time, it tending to be a bit confusing. The world building in this series is one of the high points for me. I can totally get lost in picturing the surroundings that Allison creates. I was not crazy about the love triangle. I have come to dislike Brystion because of the heartbreak he put Abby through and I'm definitely rooting for Talivar and hope that they end up together. Phin just cracks me up. We actually learn a little bit more about him and the fact that Abby getting him was not a coincidence.

Abby is a really fun character. I had no problems connecting with her in book 1 and the same went for book 2. She has a lot to work out but After the ending in A SLIVER OF SHADOW there is no way that I wont read book 3.


Happy Reading!!!
Posted by StacyUFI at 2:59 AM No comments: