UFI welcomes Author Dani Harper. Thanks for Joining us!!

Did you ever think of the setting of a story as a character by itself?


Imagine it -- the smells, the sounds, the sights, the feel. The direction and strength of the wind, and the long light cast at sunset that caresses the land just so. The brick face of an old downtown building that’s still radiating the heat of the day after dark. There’s a tangible chemistry there that’s almost a presence.

I’ve been fortunate to live in some amazing places, so it’s been very natural for those places to appear in my paranormal novels. My first wolfen shapeshifter series took place in northern Canada and Alaska, for instance. Not only did I write my surroundings into my stories, my surroundings often inspired the stories.

There are two main settings for my new Grim Series. One is the immortal faery realm beneath the country of Wales. For that, I resort to a wealth of old legends, stories I was told as a child, my imagination and dreams, and occasionally Google Earth.

But the magical realism in any of the Grim novels—comprising most of the story—is firmly set in present-day eastern Washington State. This is where my mountain man husband and I landed when we left Alaska. I’m fascinated by the arid landscape around me, a combination of jutting rock and rolling hills, enormous boulders and silver-green sagebrush. This land was scoured by the torrential flooding of ancient inland seas and monstrous glaciers, then blanketed with soft windblown silt that grows just about anything. It’s a wonderland of fascinating geographic features in unexpected places.
And a vast new faery territory lies beneath it...

In Storm Crossed, my latest standalone in the series, the spotlight is on the incredible Palouse Falls. There, the water freefalls about 200 feet into a great round rock basin of blue-green water – a perfect portal for the fae! It’s a place I visit frequently. Sometimes for picnics, sometimes for research, but more often just to walk around and allow my characters to talk to me.

Fortunately for me, they talked a lot for this book! As in the old legends, actions in the immortal faery realm impact the mortal world. And in Storm Crossed, modern humans are not only affected but actively involved. I love to place ordinary people into extraordinary situations, and see how they respond – in fact, I think that’s why I love writing paranormal and fantasy romances so much. What do you do when the impossible is standing in front of you? Is your life changed for good or ill? Are you changed? 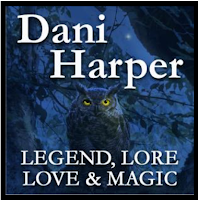 Legend, lore, love, and magic. These are the hallmarks of Dani Harper’s transformational tales of faeries, shapeshifters, ghosts, and more, for a mature audience.
A former newspaper editor, Dani’s passion for all things supernatural led her to a second career writing fiction. There isn't anything she likes better than exploring myths and legends from many cultures, which serve to inspire her sizzling and suspenseful stories.

A longtime resident of the Canadian north and southeastern Alaska, she now lives in rural Washington with her retired mountain-man husband. Together they do battle with runaway garden gnomes, rampant fruit trees, and a roving herd of predatory chickens.

Dani Harper is the author of Storm Crossed, Storm Warned, Storm Bound, Storm Warrior (the Grim Series), as well as First Bite (Dark Wolf), for Montlake Romance. She is also the author of a Yuletide ghost story, The Holiday Spirit, plus a popular shapeshifter series, which includes Changeling Moon, Changeling Dream, and Changeling Dawn. 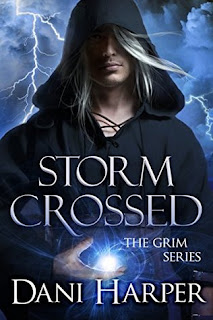 
The latest stand-alone novel in Dani Harper’s Grim Series will delight old and new fans alike, transporting them to the ancient fae realm beneath the modern human world, where magic rules and menace abounds…

Heir to a noble fae house, Trahern is forced to watch helplessly as his twin brother is cruelly changed into a grim—a death dog—as punishment for falling in love with the wrong person. Trahern doesn’t believe love exists, but he will do anything to keep his brother alive—even join the Wild Hunt and ride the night skies of the human world.

Lissy Santiago-Callahan believes in love but has no time for it. She’s busy juggling her career as an academic and her home life as a single mom to a young son with Asperger’s. Her hectic life in sleepy Eastern Washington is made even more chaotic with the sudden arrival of a demanding fae and his unusual “dog.”

Mortal and immortal have nothing in common, and the attraction between Lissy and Trahern surprises them both. But when their desire places Lissy and her child in the path of a deadly faery feud, will the connection last, or will their separate worlds prove too great a divide?

a Rafflecopter giveaway
Posted by StacyUFI at 3:00 AM 22 comments: