Guest Blog + Giveaway: The After Effect by Rose Shababy

UFI welcomes Author Rose Shababy. Thanks for Joining us!!


The Real Life of a Writer
What’s it like to be a writer?
It’s a common question, one I’ve answered in interviews and from individuals.
And it’s hard to explain, but I think I finally have a way to explain it, all thanks to a conversation I had with a new friend the other day.
This friend asked me if I wanted to go have coffee with them on Sunday. Since I work a regular nine-to-fiver, I spend a lot of time writing on the weekends. Especially if I have a deadline, which I did in this particular instance.
“I’d love to. However, I only get to go if I meet my goals for the weekend,” I answered a little ruefully.
His face lit up a little. “I’m curious, what does that mean exactly ‘your writing goals’?”
“Well, I usually have a certain word count I like to hit. So, for instance, today I hit fifteen thousand words.”
“Wow! You wrote fifteen thousand words today?”
I laughed. “No, I started out at twelve thousand.” At the look on his face I protested a little. “I know that doesn’t seem like very much. But one of the characters in my book is from the past, so I’m spending a lot of time researching things like, when was tuna salad invented? Or when did running hot water and indoor showers become commonplace? I spent forty-five researching tuna salad and chicken salad just to add dimension to the story. So my character could eat a tuna salad sandwich and marvel at “this delectable filling.”
“Wow. I never really thought about the time you would spend researching things like that.” He seemed impressed. “So when was tuna salad invented?”
I smiled. “1903.”’
The conversation made me realize think about one of the reasons I love writing so much. Because writing a story isn’t just putting words on paper. It’s plotting and crafting and editing and researching.
It’s learning, and then constantly learning some more.
And I don’t know about you, but I love discovering new and interesting things, subjects, trivia. Knowledge.
I’ve written three books under Rose Shababy and one contemporary romance under the pen name Bella D’Amato. And during that time, I’ve spent hours upon hours researching things like the following:

Just like the characters in my books, I dig and dig, trying to find the next clue to the whole story. When I finally put them all together, what happens is wonderful.
I’ve unwrapped a mystery, put all the pieces of a puzzle together, revealing a helluva picture.
In the course of writing first The Blue Effect then The After Effect, my research has taken me down paths I hadn’t originally considered. Some of those paths were happy coincidences, others forced me to look in different directions than I had originally intended.
Just like my stories, there are twists and turns during the writing process. It becomes an adventure.
In The After Effect, you’ll see a number of the puzzle pieces mention above. Kasey and his friends must unravel new mysteries. They must also continue their search for answers to questions laid out in The Blue Effect.
Which leads me back to my original question: what’s it like to be a writer?
It’s like being a drunk. Or a lonely young woman. Or a painter. Or a detective. Or, like Kasey and his friends, a superhero.
What’s more awesome than that?
__________________________________

Rose has a deep love of all things Star Trek and yearns to travel the heavens, as well as an intense desire to be bitten by a radioactive spider. Unfortunately she sucks at science and math so she hasn’t been able bring her dreams to life, instead living vicariously through books, comics, television and film. She hopes to someday make a million dollars so she can afford to buy her way to the international space station, but she’d settle for being able to fly around the world and leap tall buildings in a single bound. 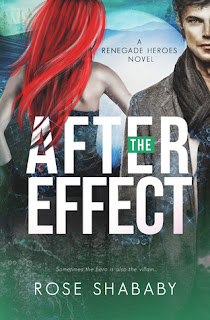 The After Effect
Renegade Heroes #2
On Sale for .99
Amazon BN Smashwords Kobo iTunes

Kasey and his friends are fringe heroes. They use their abilities to protect society, until their last battle leaves Kasey almost dead. Disillusioned, they leave the city in search of peace.

But peace is the last thing they’ll find. Ever since Kasey escaped the cold fingers of death, his powers have been running wild. It doesn’t take long for his girlfriend, Blue, and the others to notice.

In the lush forests of northern Idaho they meet a brand new hero whose shocking revelation sheds new light on Kasey’s strange behavior.

And with her revelation comes a terrible solution none of them can accept.

Worse still, Kasey soon comes face to face with the nightmares of his past.

Will the heroes find the strength to face the consequences of their mistakes? Or will Kasey be forced to make the ultimate sacrifice?

After the events of the morning, everyone seemed to need some private time, especially Blue. She went to our room and crawled back into bed, claiming to still be tired from the night before. Esme and Avery retreated outside, while Val and Ash went to town to go bowling with the couple they met the night before.
I sat by myself in the living room, remote in hand and flipping mindlessly through channels. With no one in close vicinity, I didn’t have to work to block out random thoughts and impressions. I stretched out on the couch and let myself relax completely, a rarity for me. No walls in my mind, no struggle for control, no confusion as I tried to sort out all the voices.
I came across the movie Casablanca as I scrolled through channels, and stopped. Something about the movie spoke to me, reminded me of me and Blue. I wondered if it was the depth of Rick and Ilsa’s love for each other that mirrored mine and Blue’s.
Maybe it’s the hopelessness of it, the voice inside me mocked. She has to give him up to do the right thing, and he has to push her to do it. Just as you’ll have to push Blue. There’s nothing you can do to change it. At least she’ll have Avery to comfort her after you’re gone.
Once again, the foreign anger inside me growled to life.
In defiance I pushed the channel up button on the remote, flipping through channels until I found one playing music videos and a close up of a woman’s face filled the screen.
Zelda, I thought as I studied her features. Despite Blue’s denial, I could still see a resemblance between the two of them. Zelda wore heavy makeup so it was hard to tell, and she seemed taller, leaner, and had longer features, but the similarities were there.
Her brow wrinkled as she sang, and the sadness in her eyes seemed to seep through the screen.
Stuck inside a life of maybe
Finding bliss in erratic shifts
I watch you avoiding me
Sin-free and quietly


Searching for a beautiful life
Somebody else’s life
Can I start over this life?
Breaking out