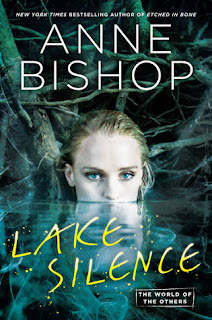 In this thrilling and suspenseful fantasy, set in the world of the New York Times bestselling Others series, Vicki DeVine and her lodger, the shapeshifter Aggie Crowe, stumble onto a dead body . . . and find themselves enmeshed in danger and dark secrets.

Human laws do not apply in the territory controlled by the Others–vampires, shapeshifters, and paranormal beings even more deadly. And this is a fact that humans should never, ever forget . . .

After her divorce, Vicki DeVine took over a rustic resort near Lake Silence, in a human town that is not human controlled. Towns like Vicki’s have no distance from the Others, the dominant predators that rule most of the land and all of the water throughout the world. And when a place has no boundaries, you never really know what’s out there watching you.

Vicki was hoping to find a new career and a new life. But when her lodger, Aggie Crowe–one of the shapeshifting Others–discovers a dead body, Vicki finds trouble instead. The detectives want to pin the man’s death on her, despite the evidence that nothing human could have killed the victim. As Vicki and her friends search for answers, things get dangerous–and it’ll take everything they have to stay alive.


I put off reading LAKE SILENCE for quite a while. I was scared that I wouldn't love it like I loved the previous books in the Others series with the different setting and characters. I am happy to report that I was worried for no reason and that I loved LAKE SILENCE just as much as its predecessors.

I DID miss Meg, Simon and the rest of the Lakeside Courtyard crew, but Vicki and her new friends—both human and Other—were easy to like, easy to root for and so much fun to get to know. Vicki has a lot of insecurities and doubts throughout LAKE SILENCE. If you're looking for a romance, you won't get it. She isn't ready to trust men romantically yet after the disaster that was her marriage, but she is on her way there.

I loved learning about another part of the world. The town and the people really helped make the story. We don't have that Courtyard feel of the last books, but there is definitely a community.

I would have liked to get to know the Others better. We get a lot of information on the humans of the group, but we only got a few tidbits about the others. Even with not getting to know them, we do get to see what their powers are used for and what they are willing to do for those that have their protection.

After finishing LAKE SILENCE I'm once again excited to continue the series and look forward to seeing what will come next.