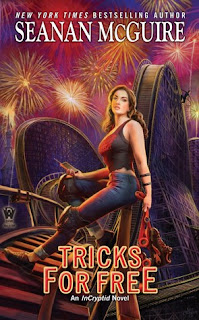 Penance, noun:
1. Punishment for past actions.
2. An attempt to pay for what can’t be bought.
3. See also “exile.”

Antimony Price is on the run. With the Covenant on her tail and her family still in danger, she needs to get far, far away from anyone who might recognize her—including her own mice. For the first time in a long time, a Price is flying without a safety net. Where do you go when you need to disappear into a crowd without worrying about attracting attention? An amusement park, of course.

Some people would call Lowryland the amusement park. It’s one of the largest in Florida, the keystone of the Lowry entertainment empire…but for Annie, it’s a place to hide. She’s just trying to keep her head down long enough to come up with a plan that will get her home without getting anyone killed. No small order when she’s rooming with gorgons and sylphs, trying to placate frustrated ghosts, and rushing to get to work on time.

Then the accidents begin. The discovery of a dead man brings Annie to the attention of the secret cabal of magic users running Lowryland from behind the scenes. They want the fire that sleeps in her fingers. They want her on their side. They want to help her—although their help, like everything else, comes with a price.

No plan. Minimal backup. No way out. Annie’s about to get a crash course in the reality behind the pretty facade. If she’s lucky, she’ll survive the experience.


TRICKS FOR TRADE was a bit slow in the beginning. Antimony finds herself isolated after the events of MAGIC FOR NOTHING force her into hiding. On her own she has to find a way to make money so she can eat and sleep somewhere other than the side of the road. Lowryland might not be the circus, but a chance encounter with someone from her past gets her a job there. Unfortunately she might not be as safe there as she expected.

A lot happens in TRICKS FOR TRADE. It's all connected, but a lot of crap falls on Annie's shoulders. Thankfully she doesn't find herself as alone as she expected. I really enjoyed the introduction of the new characters that are now a part of Annie's 'crew'.

One thing that doesn't happen is anything having to do with the Covenant of St. George storyline. Having it so heavy in the last book and not having anything happen with it in TRICKS FOR FREE was a little odd. I also realllllly missed the mice.

I still find her relationship with Sam a little weird. I'm just not in love with 'them' and it makes it hard to really get into those parts of the story.

I can't say that Antimony is my favorite Price sibling, but I still enjoy reading about her adventures. Having said that, I wouldn't be disappointed if there wasn't a lot more books with her as the main character unless something drastic happens. I guess we will see what comes next.