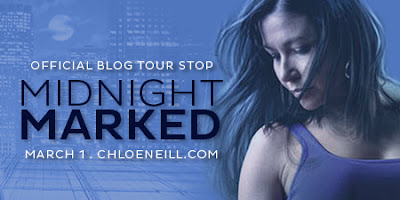 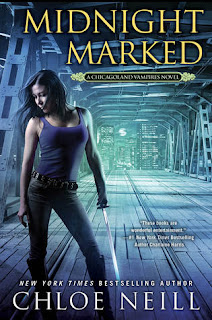 Merit is one of Chicago's most skilled vampire warriors; these days, she doesn't scare easily. But she and Master vampire Ethan have made a new and powerful enemy, and he won't give up until he owns the Windy City.

With his last plan thwarted, he's more determined than ever to watch Cadogan burn. Ethan has put the House's vampires on high alert, but their enemy will stop at nothing, including pitting vampire against vampire...

In this deadly game of cat-and-mouse, the stakes are life or death—and winning might mean sacrificing everything...

MIDNIGHT MARKED complimented the Chicagoland Vampires series well and I love how storylines are moving along.

Can you believe it's only been a year since Merit became a vampire? SO much has happened that it seems like so much longer, but alas it's only been a year. Merit has changed a lot since book one. She has grown into her new life as a vampire, she fell in love, she is starting to mend fences with her family and she seems excited about the future.

I don't know why—ok that's a lie, it makes me giddy when he gets put in his place after the fact—but I really love watching Ethan make stupid decisions. Especially when Merit makes it clear to him that it's a set-up and he still does it and she gets to tell him I told you so. Ethan of course gets himself into a little trouble in MIDNIGHT MARKED, but thankfully him and Merit make the bad guy regret the day he started messing with them and their city.

I'm from Chicago and I absolutely love all of the things Neill brings into the story—even if some of it is fiction. I completely get Merit's love of Chicago food. Whenever we go back for the holidays to visit family, there are at least a dozen things that I just have to get that I can only get in Chicago and the surrounding areas—I also gain a good 5 pounds. One of those things is pizza. If you have never had Chicago pizza, you are missing out big time and when you try it, pizza will never be the same.

For some reason the farther along in a series the book, the harder I find it to review. I continue to love the characters, the plot is always entertaining and the relationship between Merit and Ethan still has its 'moments', but they always seem to come out ahead and still in love. I truly never want this series to end, but I know the end is coming with the next book and I just don't see how things could possibly be over.

Chloe Neill is the New York Times and USA Today bestselling author of the Devil’s Isle, Chicagoland Vampires, and Dark Elite series. She was born and raised in the South, but now makes her home in the Midwest.  When not writing, she bakes, works, and scours the Internet for good recipes and great graphic design. Chloe also maintains her sanity by spending time with her boys–her favorite landscape photographer/husband and their dogs, Baxter and Scout. (Both she and the photographer understand the dogs are in charge.)