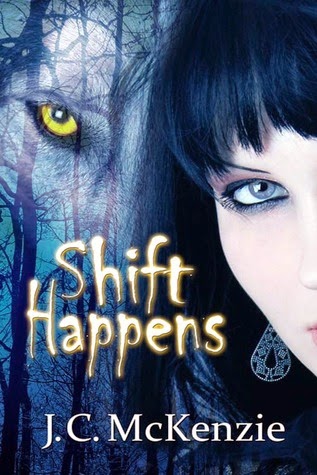 
Andrea McNelly's job as a government agent is not asking questions, but then a routine assignment turns into a botched assassination of a Master Vampire's human servant. Answers become a priority. Her search to discover the truth is riddled with obstacles, the largest being an oversized Werewolf who resembles a Norse god. Andy can't afford the distraction he offers, because if she fails, she faces eternal enslavement.

Wick's job is to monitor Andy, but he prefers more intimate activities, none of them G-Rated. His choices, however, are often not his own. His ability to help Andy is limited by his bond to the Master Vampire.

Facing many trials and challenges along her path to redemption, Andy learns the value of her freedom might be set too high.


The blurb didn't really drag me in but after reading a little more about SHIFT HAPPENS on the web I decided to give it a shot. Andrea's position as a government agent/assassin puts her in a rough spot when an assignment doesn't go as planned and she is captured by a werewolf pack. The master vampire in charge of the werewolves tasks her with finding the truth about who is behind her assignment or else. The truth is not easy to come by and by the end of the story her life has been turned upside down, righted back up and then flopped on its side.

Andrea has not had it easy and we slowly learn about her past and who she really is as SHIFT HAPPENS evolves. I liked her right away, her character was real and easy to relate to. She was a good mix of bad ass and vulnerable. Wick is the alpha of his pack. Unfortunately his pack is controlled by a master vampire so he has no choice but to obey his commands. He knows right away that Andrea is his mate but the complicated situations keeps him from keeping her totally safe and her stubbornness keeps them apart for longer than he would like. I see a major love triangle in the next book. I don't really know how I feel about it at this point as I really like Wick and feel they work well together. The added complication doesn't interest me, but we will see what happens because I can't not read more.

Not only is the world well developed but the characters really brought the story home. Even though the story is told in Andrea's voice each and every secondary character makes an impact. That is not easy to do. The story as a whole had a great flow and kept me interested from start to finish. Book two BEAST COAST is already on my wishlist.

* This book was provided free of charge from the author in exchange for an honest review.
Posted by StacyUFI at 3:00 AM 4 comments: