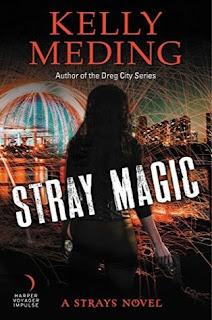 Shiloh Harrison was hoping for a few days off to recover from a particularly nasty assignment, preferably with the help of the talented hands (and, well, the rest of his body too) of her sexy boyfriend, Vincent. But when a group of vampires takes an entire trailer park hostage, there’s nothing to do but make her apologies and get to the scene.

Such is the life of a Federal Marshal in the Paranormal Investigators Unit.

Yet this isn’t like her typical track-and-nab case: something is going on that has vampires scared, and it takes all her strength not to imagine what could frighten such powerful creatures. Unfortunately, she doesn’t have that option. Her boss is MIA, someone is snatching vampires, and there’s a ticking clock that can only end one way: a bloodbath.

Unless she can stop it.


Shiloh was interesting. She's was both likable and easy to understand. I enjoyed learning about Shiloh's unit. They all have their strengths and weaknesses, but worked well together.  I guess there is a prequel to STRAY MAGIC in the Carniepunk anthology titled FREAK HOUSE. It is set many years in the past and tells more of Shiloh's story, the world and the relationship between Shiloh and the other members of her team. If I would have known about it before picking this book up, I would have read it. I think some of the information would have made a few things in STRAY MAGIC make more sense.

I enjoyed the twists and turns of both the world and the storyline involved in STRAY MAGIC.  I didn't feel like anything was overly obvious in the story and I really enjoyed the mystery behind everything.

I wasn't crazy about the boyfriend portion of the story. Shiloh talks about being happy with and possibly wanting more with Vincent, but when he was in danger I didn't get that vibe from her. She cared, but it was kinda in the background. I really liked Tennyson though. They had great chemistry and I hope he is back and something blossoms between them in book two.

STRAY MAGIC ended with some things left unfinished. STRAY MOON will be here in November of 2018 and I plan to read it.