Guest Blog + Giveaway: Between a Wolf and a Hard Place by Terry Spear

UFI welcomes Author Terry Spear. Thanks for Joining us!!


Bestselling author Terry Spear is known for her fantastic paranormal romance novels, including Between a Wolf and Hard Place, available April 4th! But what paranormal stories does she enjoy most when she’s not hard at work on her next book? Read on for Terry’s favorites!
Stardust—She’s a fallen star and witches want to use her essence to make themselves young again while brothers in the kingdom are killing each other off so that one will end up with the crown. One by one, they become ghosts and watch to see which brother ends up with the prize. It’s a really funny movie—and it’s a romance!
Practical Magic—She’s a witch from a family cursed to never be able to find a man who they can love— or else he dies. But she’s wished on a star for a man with one blue eye and one brown, figuring no one like that will ever come to see her. That is, until the sheriff comes to investigate the disappearance of a man who returns from the dead to terrorize them. The sheriff isn’t into the paranormal, so he’s got a lot to learn.
Hocus Pocus—The witches need a virgin to make them youthful, and the kids must destroy the witches before they become all powerful. The kids trick them into believing sunrise has already come to escape. The witches put up quite a battle but end up turning to stone and disintegrate into dust.
Ghost—I love this one because of the love story. The hero wants his wife to know his murderer is his best friend before he can move on. Very touching, and sexy, with newlyweds whose married life is cut short. Whoopi Goldberg is hilarious as the medium who serves as his vessel so that he can return to his dead wife to hold her one last time and say goodbye.
__________________________________ 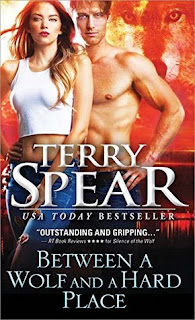 Alpha werewolf Brett Silver has an ulterior motive when he donates a prized family heirloom to the Silver Town hotel. Ellie MacTire owns the place with her sisters, and he's out to get her attention.

Ellie is even more special than Brett knows. She's a wolf-shifter with a unique ability to commune with the dead. Ellie has been ostracized, so she protects herself and those she loves by revealing nothing-not even when strange and dangerous things begin to happen in Silver Town. And especially not to the devastatingly handsome and generous wolf who's determined to win her over...