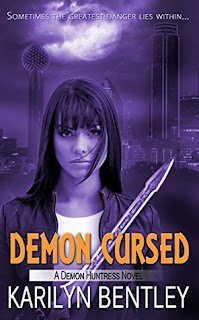 
Gin Crawford, the world's newest demon huntress, just wants to enjoy a football game, but finds herself hunting a serial killer minion instead. When his victims turn out to be the local football star’s female fans, she must determine if the player has joined forces with the minion, but her efforts lead her deeper into danger. When her mentor, Aidan Smythe, is attacked, Gin resolves to go to any lengths to save him, even if it exposes her most tightly held secret. Minions and demons, however, aren't the only terrors she faces. Will she realize the greatest danger lies within—before it's too late?


When Karilyn Bentley emailed me to request a review for the first book in her Demon Huntress series I agreed, but wasn't really expecting much out of it. I know, I shouldn't judge a book by it's cover, but I always do. The cover for DEMON LORE isn't bad, it just didn't grab me and say "read me now". Thankfully the story snuck up on me and I found myself enjoying it enough to read book two, DEMON KISSED. When Karilyn once again reached out asking for a review of book three I had no hesitation about agreeing as I was still interested in following Gin's story to see what would happen next.

DEMON CURSED has quite a bit going on. There is an attack on the agency and Gin reveals abilities that put her in danger. Gin is still wrestling with feelings for her partner Aidan—and I am SO happy to say there is some movement here I think most will love, but by the end some will hate. On top of that, women are turning up dead and they are all connected to a football star that is putting the moves on Gin and Zagan continues to confuse Gin —and me, cause I still can't read the situation. Lastly, Gin and her brother T's close relationship is put to the test when he blames her for an event that happens.

DEMON CURSED ends with some major stuff happening. I don't want to spoil anything by telling too much, but it's so hard not to vent a little soooo........ *Spoil Alert*. Aidan and Gin have a fight where Aidan storms off without letting Gin explain things and then she is attacked while Aidan is blocking his mind from her and she can't get his help. This made me SO mad!! He knew things were happening and she could have died! He had a right to be angry, but I am still so mad that he wasn't there for her when she needed him the most because his feelings were hurt. *End Spoiler*...... I can't even begin to imagine where things will go from there, but Aidan is on my shit list.

I found DEMON CURSED as enjoyable as the first two books and look forward to the time when Karilyn Bentley reaches out for a review of book four!