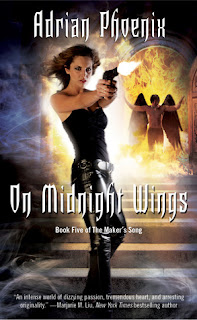 A DESPERATE SEARCH. A DARK AND DANGEROUS JOURNEY. AND EVERY STEP COULD DESTROY EVERYONE DANTE LOVES.

ONLY ONE MORTAL WOMAN CAN SAVE HIM . . .

As Dante Baptiste’s true identity as both True Blood and Fallen ripples throughout New Orleans, he and Heather struggle for their lives against different foes, fighting their way back to each other. To free herself from her father’s treachery, Heather accepts help from an ally–and steps into even greater danger﻿. Dante, lost to his brutal past, wavers between his own sense of self and the Bad Seed-programmed S that lurks within, between the never-ending Road and the Great Destroyer. And the danger of becoming both.

. . . UNLESS THE FALLEN REACH HIM FIRST.

Lucien searches frantically for the lovers, all too aware that time is running out. Dark forces continue to gather, eager to possess and manipulate the young vampire for their own ends. The fate of mortals, nightkind, and the Fallen pivots around Dante as he struggles to piece together his shattered psyche and gain control of his power before he rips all three worlds asunder.


It has been 2 years since the release of book 4 ETCHED IN BONE and Adrian Phoenix is the queen of cliffhangers so they have been loooong years. I was very worried that I would not remember what happened in book 4 but thankfully Adrian did a pretty good job of recapping events without over recapping events and boring us. There were a few points where I got a bit lost, or had a hard time catching the events that brought the character to a point but for the most part everything flowed well.

The story was just as fast paced and action filled as earlier books in the series. All of the main characters have a voice, and there is plenty of conflict with each of them dealing with their own things. I got a bit annoyed with Dante once again being super broken and away from his allies and thinking about the past with the present and so on. You can only take so much of reading the same events over and over and I feel we have reached that point so I do hope that we get a bit of relief from it in the next book.

Over all this was another great installment, that left us with another huge cliffhanger. PLEASE don't make us wait 2 more long years for book 6. Any fan of the series will enjoy ON MIDNIGHT WINGS.