UFI welcomes Brantwijn Serrah Author of Eat Dessert First. Thanks for Joining us!!

Angels or Demons – Demons. They are so much more interesting...

Vampires or Shifters – I like shifters when they're done well, but I still gotta choose vampires. Classic.

Left or Right – Left. In honor of my oldest brother, all of my main characters are left-handed.

Up or Down – Ha. This one really depends. I think "up" is more positive, but there's lots to be said about "going down".

Coffee or Tea – Tea, no sugar.

Coke or Pepsi – I don't really like colas, so I prefer Cherry 7Up or Cream Soda.

YA or Adult – Adult.

Knives or Guns – Knives. My partner is the gun guy.

Reading or Writing –I like both but I'll spend my free time writing.

When she isn't visiting the worlds of immortals, demons, dragons and goblins, Brantwijn fills her time with artistic endeavors: sketching, painting, customizing My Little Ponies, and sewing plushies for friends. She can't handle coffee unless there's enough cream and sugar to make it a milkshake, but try and sweeten her tea and she will never forgive you. She moonlights as a futon for four lazy cats, loves tabletop role-play games, and can spend hours watching Futurama, Claymore, or Buffy the Vampire Slayer while she writes or draws.

Brantwijn has published two full-length erotic novels with Breathless Press: Lotus Petals and Goblin Fires. In addition to these, Brantwijn has had several stories published in anthologies by Breathless Press, including the 2013 Crimson Anthology and 2014 Ravaged Anthology. She's also had a short story published in the Cleiss Press Big Book of Orgasm and the anthology Coming Together Through The Storm. She hopes to have several more tales to tell as time goes on. She has author pages on Goodreads and Amazon, and loves to see reader comments on her work. Her short stories occasionally pop up at Foreplay and Fangs, her blog at http://brantwijn.blogspot.com. 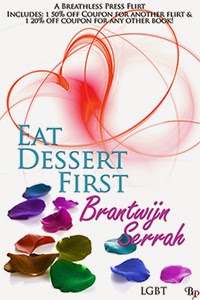 Andres makes a living in delectable desserts. When his own sweet temptation catches him by surprise in his kitchen, Andres will sample something truly delicious...

Like any good dessert chef, Andres takes the extra time to perfect his recipes. That's why he's in the kitchen early tonight, getting familiar with a unique menu item. He didn't expect the beautiful sous-chef, Pietro, to show up... or that Pietro would be interested in a special sweet treat. 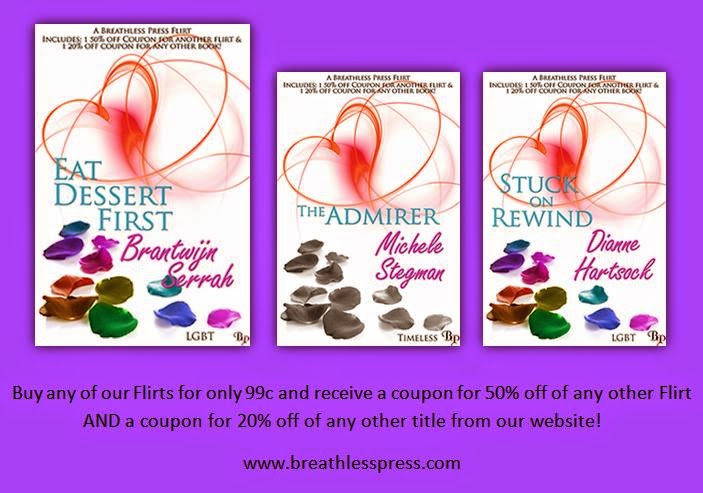 
I lifted the bubbling saucepan up and over to ladle the crème brûlée into each dish with slow, patient care, letting the rich mixture cascade down in rippling slow spirals as I moved the pan in little circles.

"There," I said when the last ramekin was filled. "And now you can lick the spoon."

I pronounced this with open brightness and offered him the spoon I'd stirred with, dripping with white chocolate and vanilla cream. Before he could take it, though, I snatched it back, holding it up in front of my own lips and sticking out my tongue to run it coyly over the back of the spoon.

He took the spoon from me, his smile reflecting the same naughty suggestion as mine. He licked the spoon as I had, dragging his tongue across it almost lewdly, dark eyes sparkling. Then he grinned, put the utensil down on the gleaming brushed chrome of the pastry counter, and—devilish boy—snuck his fingers into one of the ramekins, trailing them through the cooling, creamy sugar until he found one of the raspberries and plucked it up from the dish. It dripped more white chocolate cream on his hand and the front of his crisp shirt as he popped it into his luscious mouth.
__________________________________