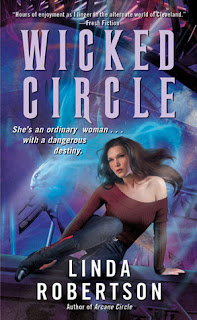 The fifth in the exciting urban fantasy series featuring Persephone Alcmedi, a modern-day witch with a sexy werewolf boyfriend. Persephone Alcmedi has helped her waerewolf lover Johnny unlock his powers. Now she must come to the aid of Menessos, the vampire overlord she has secretly marked. Beset by a trio of truth-seeking vampire sisters so dangerous their own kind keep them confined in stone, he now needs her more than ever...and she realizes her need for him. Seph has magical promises to fulfill for the waeres, multiple mundane family challenges to meet, vampire politics to confront, both the supernatural males in her life to balance, a dragon to deal with...and then a government investigator shows up to complicate matters.

This is a great series!! It is one of my favorite "witchy" book series. The storyline always wraps me around its finger and holds on to me until the book is over. There wasn't a lot of action like there is in the other books in the series, WICKED CIRCLE was more about information than anything else. There  is a little bit of danger but not on the scale that other installments brought. We get new shocking details about Johnny's past, Seph re-evaluates her relationships. Characters do some changing. More people are out to kill the power trio and Seph ends up saving herself from a pretty crappy situation.

There is a new interesting character introduced "Creepy", he is as you imagine creepy and I cant even begin to guess who he really is. There are a lot of secrets surrounding him, who he is, what he is, etc and his relationship to Menessos. I definitely think his involvement in the next book will be huge and I will be super shocked when more is revealed.  Oh my the ending, as if there wasn't enough drama between Johnny and Menessos before I cant imagine what they will be like after that ending. It seems like WICKED CIRCLE is the changing point for a lot of things and I wish the next book was scheduled already as it was more of a teaser and I want more.