I was a radio DJ for a couple of years.  It was a fun experience, but unless you are on the east or west coast of the United States, the pay sucks. I did get great seats to rock concerts and met a lot of the band members.

Living in a fantasy world of my own creation.

Not really, I have a set schedule that I write for 2-4 hours in the morning, depending on the promo schedule, then another 3 hours or so in the afternoon.

How would you pitch A Vampire’s Unlikely Alliance to someone who has not heard of it before?
A Demon’s Witch Series is a spicy paranormal romance series that has it all, Intrigue, humor, thrills, danger and a splash of magic to keep you on the edge of your seat.

A Vampire’s Unlikely Alliance, third book in the series is an exciting romantic fantasy beginning in Glacier National Park, winds through Australia. If Irish myths and legends control their destiny, will they make it to Ireland for Christmas? Their travels may be the key to unravelling secrets and returning the magic.

Can you tell us a little bit about the world that A Vampire’s Unlikely Alliance  is set in?

It’s set in the real world but the magic is hidden from mortals.

Do you have a favorite scene in A Vampire’s Unlikely Alliance?

Yes, when Stefan comes back from talking with the King of the Warrior Faeries. He tells Brandy that he’s just had a conversation with one of the Irish myths that she talks about in her storytelling. Brandy is an Irish Seanachi (Storyteller) in addition to being a park ranger.

Which one character out of all your books was your favorite to write about? What about the hardest to write about?
Stefan (A Vampire’s Unlikely Alliance) was my favorite. He appears in all of the Demon’s Witch Series, so far. Tristian (A Warlock’s Secrets) was my most difficult. I didn’t expect that assassin in my stories to have a book of his own, yet the readers and reviewers clamored for his story. I guess I didn’t know him well enough at the beginning of the book, but I sure knew him by the end. LOL

I recently turned in the fourth book in the Demon’s Witch Series, An Angels Unintentional Entanglement, should be released by mid 2018. I’m also working on the fifth book, which will be a surprise for my readers. It’s another one that will be a bit different. There’s also a sequel to Charm Me, a third book in the Witch’s Journey Series and a really cool romantic suspense set in a little town in the Rocky Mountains involving, Special Forces, CIA operative, small town sheriff and lots of twists and turns.
__________________________________ 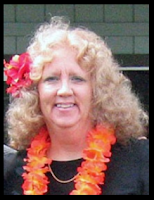 Tena Stetler is a paranormal romance and cozy mystery author with an over-active imagination.  She wrote her first vampire romance as a tween, to the chagrin of her mother and the delight of her friends.

With the Rocky Mountains outside her window, Tena sits at her computer surrounded by a wide array of paranormal creatures telling her their tales. Colorado is her home; shared with her husband of many moons, a brilliant Chow Chow, a spoiled parrot and a forty-year-old box turtle.

Any evening, you can find her curled up in front of a crackling fire with a good book, a mug of hot chocolate and a big bowl of popcorn. Her books tell tales of magical kick-ass women and mystical alpha males that dare to love them. 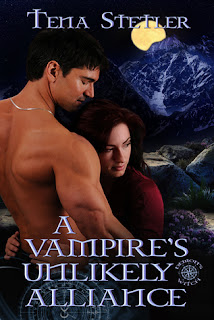 
Stefan is a Native American vampire, former assassin for the Vampire Council. In a twist of fate, he now DJ’s the midnight shift for a small radio station in Whitefish, Montana, on the edge of Glacier National Park where his secret is safe until...

Born in Ireland, Brandy now works as a park ranger and trail guide in the park. During a full moon, Stefan and Brandy’s paths cross in a near physical collision on a trail. Their attraction is immediate and undeniable, almost as if fate demanded it.

Their union was foretold long ago in Irish folk tales where vampires and gryphons, warlocks and demons, witches and faeries must work together for the good of man and magic kind. Is a trip to Ireland the key to unravelling secrets and returning the magic? And even more importantly, will their love survive the trip?

The sun slid behind the mountains, setting the azure sky ablaze in hues of red, orange, yellow, and pink. Then red shifted to purple and dusk faded to darkness as he jogged toward the trails. She stood leaning against the rock where he had started his run last night. He’d tried to convince himself to stay away, but in the end, the urge was too strong.
In a whisper of movement, he was at her side with his hand on the rock just above her shoulder. “Waiting for someone? Brandy, is it?” The scent of warm, perfumed female skin wafted over him as he leaned into her.
“It took you long enough, Mr. Talltree.” Her full lips formed a slight pout as she lifted her chin and tilted her face up to meet his. “Nice to see you again.”
There was no hesitation or apprehension in her lovely features as he moved closer, placing his other hand next to her left shoulder, effectively pinning her against the rock. He wanted to wrap his arms around her lithe, warm body and brush his lips over her sexy pout. But he thought better of it, not wanting to scare her off…not yet.
“Yes, it is.” He let his gaze wander leisurely up and down her luscious body. “Didn’t your mother warn you about the dangers of stalking a stranger at night in the park alone?”