The Winner chosen by Rafflecopter is.....
a Rafflecopter giveaway
Congrats!! I have emailed winner who has 48 hours to respond with mailing address or I will pick another.
Posted by StacyUFI at 6:48 AM 1 comment: 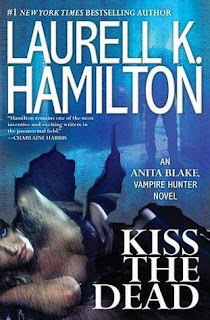 
When a fifteen-year-old girl is abducted by vampires, it’s up to U.S. Marshal Anita Blake to find her. And when she does, she’s faced with something she’s never seen before: a terrifyingly ordinary group of people—kids, grandparents, soccer moms—all recently turned and willing to die to avoid serving a master. And where there’s one martyr, there will be more…

But even vampires have monsters that they’re afraid of. And Anita is one of them…

If you have been reading the Anita Blake series this long you know the characters and you know the scores so I wont go into synopsis here and jump right in.

Things I'm not liking AT ALL: My biggest dislike about KISS THE DEAD is the fact that Anita even though she is not Bi and has always been extremely uncomfortable about it (and still says she is very uncomfortable with it) talks about that fact that she now has another woman in HER bed. Laurell has changed her way to much and I'm really not liking that she changed her despite her feelings yet again. All the men are getting a little ridiculous. The heard needs to be culled and even Anita thinks so, although I have to admit that I do appreciate that the whole book wasn't filled with orgy scenes.HATE her relationship with Sin, He should NOT be one of her lovers its just disturbing.

Things I enjoyed: LOVED that we get Anita back in the field again like book 20. Very much enjoyed Zerbrowski and watching Anita and him interact in the field and in their lunch scene. They had me cracking up and smiling. Love her relationship with Nathaniel and Micah.


Other thoughts: Asher, Wow I really hope that Jean Claude sends him away like he said as he really needs to get over himself and his issues. There is no excuse for his behavior. Wish we had more Jean-Claude scenes (not sex scenes just in general like they used to be together). The ending, How are her colleagues going to treat her now seeing her fall apart? Will they see her as more human or will they see her as weak where they saw her as nothing but strong before?!?