UFI welcomes Tiffany Allee Author of Don't Blackmail the Vampire. Thanks for Joining us!!

It’s probably pretty obvious that I have a thing for vampires. I write about them, I read about them, and I watch movies and television shows about them. But no, this post is not to analyze my (slightly obsessive) love of vampires. That’s a rabbit hole it’s probably best not to jump in. :)

Earlier in my Don’t Blackmail the Vampire tour, I created a top ten list of my favorite fanged characters. This was tough, because even with a smidgeon of cheating, it was almost impossible to get my list of favorites down to a mere ten(ish).

Instead of limiting myself, I’ve decided to indulge and list five more favorites, because really, all my favorites belong on the same list. The awesome list. ;)

So without further ado and not really in any order, here are some of my favorite vamps.

Aww…Kisten. Stupid allergies. There’s something in my eye.

Charming and awesome in so many (panty-dropping) ways, I couldn’t leave Bones off an extended list. Especially since I think he was probably the most-missed from the first!

I loved him in the books and in Interview with the Vampire (although probably more so in the books!). Charm in a vampire never fails to err…charm me.

He’s so alpha that there are times I want to kick him hard in the shin, but what a badass.

Okay, this isn’t a single character—and really, not even a group of characters so much as a force of nature in the Kate Daniel’s world—but I had to include them. The way Ilona Andrews has handled the vampire myth in these books is so cool and original, and I totally dig it.

She writes about ass-kicking heroines and the strong heroes who love them. Her work includes the suspense-driven From the Files of the Otherworlder Enforcement Agency series which revolves around a group of paranormal cops solving crimes and finding love, and Don’t Bite the Bridesmaid, a lighthearted paranormal romance (Entangled Publishing) 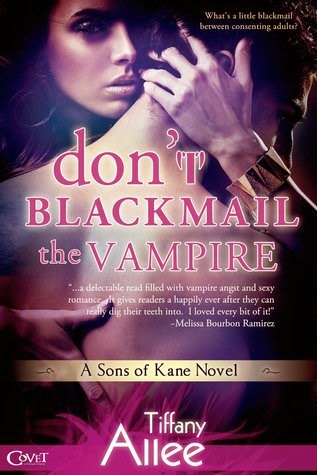 
Rachel Davis will do anything to get her sister out of a bad relationship with her fiancé. Even if it involves a few fibs, a little breaking-and-entering, and blackmailing the fiancé's potential boss, Charles, for his help. So what if the handsome Charles happens to be a vampire?

Charles Wright has found the perfect way to trap the man threatening his brother's wife: cozy up to him, get invited along on the skiing trip, and then search for incriminating evidence. How much better that audacious but gorgeous Rachel is just as eager to nail the bastard. As far as he's concerned, there's nothing wrong with a little blackmail between two consenting adults. Especially when it's time for Rachel to pay up.