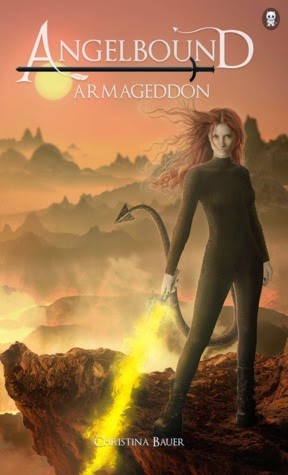 
Five years have passed since Myla Lewis last fought gladiator-style in Purgatory's Arena. Now, she’s fighting again, only this time in Hell. And the stakes have never been higher. The King of Hell, Armageddon, has kidnapped Myla and Lincoln’s young son, Maxon.

In the wake of Maxon’s abduction, all the after-realms calling for war, and no one shouts louder than Lincoln. Myla knows that a war against Hell will cost millions of lives, so she devises her own plan, involving a small attack team and a secret entrance to Hell. Will Myla save Maxon, or will her child and all the after-realms fall to Armageddon?


I wasn't really sure I would enjoy ARMAGEDDON seeing as so much time has passed since the ending of SCALA and they're now parents. I was worried I wouldn't be able to get into the new setting. I was wrong. I was instantly able to reconnect with both Myla and Lincoln and fell in love with their little man, Maxon.

ARMAGEDDON felt a lot shorter than the previous 2 books. There was a lot of action, but the pages really flew by. The major happenings involved Maxon, their son, getting kidnapped by The King of Hell. I really enjoyed the way everything played out. I enjoyed the additional characters that were introduced and ended up being instrumental in the story. It was great seeing how Myla has grown, but also seeing how she managed to stay herself at the same time. I was really shocked with the revelations that came out involving Lincoln's Dad. I didn't see that coming at all. The ending did a great job of finishing off the storyline that started in ANGELBOUND.

Book 4, MAXON, will feature Maxon as the main character and it sounds like he will fall in love with someone that sounds just like Myla. lol. Can't wait to see where Christina Bauer takes him.