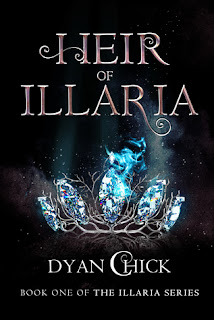 In Illaria, there is a fate worse than death.

As long as I can remember, I’ve been taught to fear the Necromancer King. He controls the kingdom of Illaria with dark sorcery and the constant threat of his undead army. I never thought I’d have reason to cross his path. Everything changed the day his guards tried to kill me. That’s when I found out my whole life has been a lie. By joining a resistance group called the White Ravens, I’ve claimed new roles. Princess of Illaria, sorceress in training, and threat to the Necromancer King.


It didn't take me long to start enjoying HEIR OF ILLARIA and the characters quickly grew on me, but there were a few things that kept book one in the Illaria series from being a total hit for me.

Wilona was easy to like. She was raised to think she was just a normal girl and ends up finding out that she is actually a princess and the true heir to the throne. Wilona is a bit naive and very innocent, but she grows from weak to strong from start to finish of the story.

Although we have seen the whole 'normal girl is really royalty' storyline before, I still enjoyed the plot of HEIR OF ILLARIA. I enjoyed the progress that both the story and the characters made and I also enjoyed the world that everything took place in.

Now for the not so awesome parts. I found the romance a bit lackluster. It was missing the zing I look for in a romance. There is definitely room for that zing to grow, but so far I'm missing it. Another thing was the pace. For most of the book the pace was great, but there were times that it went a little too fast and I felt like the details just weren't there. These issues weren't huge enough to ruin the story, but they were worth mentioning.

I definitely enjoyed HEIR OF ILLARIA enough to want to find out what would happen next for Wilona and the rest of her allies in book two, ORACLE OF ILLARIA.