Thank you to everyone who entered!!
Prize:Paperback copy of Immortal Hope

The Winner chosen by Rafflecopter is.....
Read more »
Posted by StacyUFI at 7:29 PM No comments: 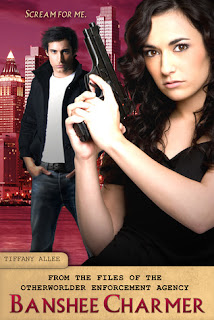 
When she’s sent to a crime scene and finds her second dead woman in as many weeks, half-banshee detective Kiera “Mac” McLoughlin is convinced a serial killer is on the loose. Incubi are extinct, her boss insists. But what else can kill a woman in the throes of pleasure? When her partner is murdered after using witchcraft to locate the killer and Mac is thrown off the case, her frustration turns to desperation.

Certain the killer is an incubus, Mac works behind her department’s back to chase down slim, sometimes perilous leads. While the killer eludes her, she does discover handsome Aidan Byrne, an investigative counterpart from the enigmatic Otherworlder Enforcement Agency. Mac typically runs her investigations fast and hard, but with Aidan at her side, she’s running this one “hot” as well. But Aidan knows more than he’s letting on—something that could shatter their blazing romance and add Mac to the killer’s growing body count…

BANSHEE CHARMER was an easy to read, fast paced paranormal Romance. The length of the book is kinda short. I didn't feel like information was lacking but I would have liked to have a little longer of a book.

Kiera is a half Banshee detective who can use her scream to harm, kill or stun someone. There are not a lot of Banshee type books out at the moment and it was nice to read about a different paranormal type. The romance part of the book was kinda lacking. Kiera was easy to like and get to know. There was a love interest (sexy mysterious Aidan) and there was some nice hot scenes but there was more investigating and mystery than there was romance and getting to know each other. I love investigation types book so I really enjoyed the "police investigation" parts of BANSHEE CHARMER. I liked following the evidence that was revealed and trying to follow along in where Kiera thought the leads were.I didn't feel like the mystery of the story was predictable. I knew what Aidan was from a pretty early point but the bad guy was a mystery throughout.

BANSHEE CHARMER ended up being a great mystery and I will read book 2 to hopefully get some more romance between Kiera and Aidan.