Review: Love Me To Death by Marissa Clarke 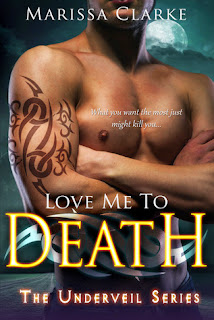 
I'm not going to lie, I was mighty confused during the first couple chapters of LOVE ME TO DEATH, thankfully things become more clear as Elena learns what the heck is happening to her and who the heck Nikolai is.

Elena has NO clue what's going on when she wakes up after being shot during a robbery. The sexy man that saved her kidnaps her and is able to do some crazy things. On top of that he's treating her like she is some horrible thing to be despised. Nik meant to kill Elena, but something just doesn't seem right to him so he saves her instead. It starts a chain reaction of events that turn him into a bit of an outlaw with his group and leads him to find out things he never knew about them to begin with.

Elana and Nikolai were both great characters. Nikolai was a bit of a jerk for a big portion of the book, but thankfully pulls his head out of his butt eventually. The couple has great chemistry and they put it to good use. Both grow a ton together and come out as a strong couple at the end of the book.

The plot in LOVE ME TO DEATH moves at a nice clip for most of the book and there is plenty of action involved. The drama that the couple creates was quite entertaining. We meet a great cast of secondary characters, whom I'm excited to read more about. LOVE ME TO DEATH kept me engaged and I will definitely pick up book two!


* This book was provided free of charge from NetGalley in exchange for an honest review.
Posted by StacyUFI at 3:00 AM No comments: