UFI welcomes Author Anastasia Wilde. Thanks for Joining us!!

Let’s see… I’m a huge fan of pro tennis. Like, I have apps on my phone where I check scores all the time, and I know stats for top players. Don’t even try to talk to me during the finals of a major tournament. Because no.

Down time? I’m a self-published author…what is this thing you call ‘down time’?

Seriously, though, I like to ice skate and I like to draw, but my drawings are usually copied from photos because I suck at drawing things from my imagination. I also loooove road trips, but I haven’t had time to take many in the last couple years.

I like revising. I hate loathe and despise writing first drafts, so I just try to get something down as fast as I can, and then I can do the magic part where it turns into a real fleshed-out scene before my eyes. My favorite part of being an author is hearing from readers who love my books! It still blows my mind that I have real readers.

I would probably be better off if I had routines but I don’t. I usually tell myself I’m going to start writing first thing in the morning and then I let myself get distracted by marketing stuff instead, until I panic and then make myself sit down and do my writing for the day.

I read a lot of paranormal romance, and some of my favorite authors are TS Joyce and Zoe Chant. I also love Gail Carriger’s steampunk Victorian urban fantasy, like the Finishing School series and Parasol Protectorate – so fun! Straight-up urban fantasy, one of my favorites is Mark Henwick’s Bite Back series. A whole new take on vampires and werewolves, and a totally kickass female main character.

How would you pitch Dragon’s Rogue and the Wild Dragons series to someone who has not heard of it before?

The evil Dragon Lord Vyrkos is about to rise from captivity in a devastating volcanic eruption. Only the Greystone brothers can stop him—and only if they find the three women prophesied to hold the keys to sealing Vyrkos’ tomb forever.

Dragon’s Rogue is the story of dragon shifter Zane Greystone and his Destined Mate, Blaze McKenna—a powerful witch who holds the first Seal to Vyrkos’ tomb. But only true love can reveal the Seal and unleash its power.

Can you tell us a little bit about the world that the Wild Dragons series is set in?

It’s set in our world, in Portland, Oregon. Except nearby Mount Hood isn’t just a dormant volcano—it’s got an ancient, evil Dragon Lord sleeping under it, who’s about to wake up and wreak havoc on the unsuspecting citizens. There are also witches and dark sorcerers and hellhounds and some scary magic, and dragons watch over the city and everyone in it.

Do you have a favorite scene in Dragon’s Rogue?

There’s a scene where Blaze confronts the Greystone brothers at a party, thinking they’re members of the evil coven that’s hunting her down. Certain hot dragon shifters end up strung up by their wrists, while Blaze tears their shirts off (with magic) looking for their coven tattoos (which they don’t have). There’s romantic moonlight, female badassiness, dragons in tuxes, and eight-pack abs. What’s not to love?

Both the favorite and the hardest were from my previous series, the Bad Blood Shifters. Flynn, the alpha of the crew and hero of Book 5, Bad Blood Alpha, is my favorite. He’s a larger-than-life badass who’s not intimidated by anything or anyone. He also doesn’t give a **** what anyone says or thinks, and says whatever he wants to whoever he wants, so he’s really fun to write. (He also cusses a LOT. Be warned: my books are not a cuss-free zone.)

The hardest was Jasmin, the heroine of Bad Blood Wolf. She’s a tough-as-nails brawler  jaguar (and a cage fighting champion), who’d already appeared as a minor character in a couple of books. It was hard to find a way to write from inside her head—most badass people don’t go around thinking about how badass they are all day (at least, not the ones you want to read about). But showing her softer, more vulnerable side while staying true to the gruff, wild exterior I’d already established was a challenge.

Anastasia Wilde lives in the deep forests of the Pacific Northwest, where sexy shifters may or may not be found hiding among the tall, ancient trees. She loves to write paranormal romances about wild, passionate shifter men and the strong women who are destined to win their hearts. Broken, complicated, devoted, protective—love heals their wounds and smooths their rough edges (but not too much!). When not writing, Anastasia enjoys traveling, nomming on any food involving bacon or melty cheese (ideally both), adding to her magical crystal collection, or relaxing with a glass of wine, watching the sun set behind the mountains. 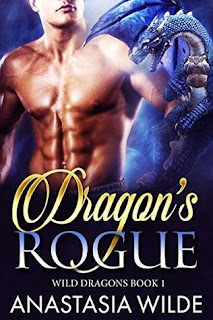 
He’s loved her in his dreams for a hundred years. Now he’s finally found her, and he’ll do anything to make her is own…

The evil Dragon Lord Vyrkos is about to rise from captivity in a devastating volcanic eruption. Only the Greystone brothers can stop him—and only if they find the three women who hold the keys to sealing Vyrkos’ tomb forever.

Blaze McKenna is a witch hiding out from her former coven. After stealing their most powerful artifact to keep them from destroying themselves, she’s been preparing for the day when the coven leader will hunt her down and try to take it back.

A battle that only one of them will walk away from.

So when smoking hot dragon shifter Zane Greystone offers to help her fight the coven in return for her handing over one of the Seals to Vyrkos’ tomb, it sounds like the perfect plan—except for two problems.

She doesn’t know where the Seal is.

And the dragon doesn’t just want her help—he wants her heart, body and soul.

The butler gestured to the terrace doors on the other side of the room. He stepped discreetly back into the hallway, closing the door behind him.
Zane took a deep breath, and then walked between the fluttering sheer curtains out onto the terrace. He caught a glimpse of an expanse of starry sky before he turned to meet the woman whose house he'd broken into the night before. The woman from his dream visions.
“Hello,” he said, extending his hand. “Thank you for meeting me. I—”
That was as far as he got. Two silken ropes twined around his wrists and yanked, as if held by invisible hands. Before he could react, he was suspended a few inches off the ground, his arms spread over his head in a Y-shape.
She’d outsmarted him. He was trapped.
Before he could say a word, Blaze made a swift movement with her hands. His shirt ripped open down the front and spread wide, exposing his heart.
Oh, hell, Zane thought. This can’t be good. She must have recognized him from last night.
And she was clearly holding a grudge.
Blaze walked right up to him, ignoring his struggles, and ran her hands over his chest. The heat from her fingers seemed to strike all the way down into his bones.
His exclamation turned into a murmured exhale. “What the hell are you doing to me?”
“Where’s your tattoo?” she demanded.
“My what?”
He had no idea what she was talking about. ‘Thorne?’ he called mentally to his brother. ‘Little help here? I’m on the terrace outside the study.’ He projected a picture of its location. ‘Come from outside. Cloak yourself. We’re having an issue with the lovely Ms. McKenna.’
His brother replied, ‘Saw you leave. Already on my way.’
“Your coven tattoo. Where is it?” Blaze jerked her hand back, walked around behind him, and magically ripped the back of his shirt and jacket as well. He shivered at the sudden touch of the night air on his bare skin.
Or maybe it was her making him shiver.
He felt her fingers on his left shoulder blade, and sucked in his breath involuntarily. Just that small contact sent electricity shooting through his body.
She thought he was a sorcerer. An evil one, if the way he was hanging from his wrists like laundry on a clothesline was anything to go by.
“I’m not in a coven,” he told her.
She came around to face him again. “You must be. You’re too powerful to be solo, and I felt power in the others, too. Stop lying.”
There was a sudden gust of wind, and Zane felt Thorne’s dragon presence just above the terrace. Then his brother shifted mid-air, uncloaked and landed on the terrace behind Blaze, in human form.
‘Watch out, bro.’ he cautioned silently. ‘She has a spell—’
Too late.
The minute Thorne’s feet hit the balcony, more silken ropes sprang to life and he was strung up the same way Zane was. Blaze whipped around and tore Thorne’s shirt open with her magic.
Damn. Beautiful witch: 2, Dragons: 0
Not the heroic first impression he’d intended to make.
Blaze backed up, looking from one to the other. “All right,” she said. “No tattoos, no coven. So spill it. Who are you people, why were you after my artifact, and how much pain do I have to put you through to get it back?”