UFI welcomes Danube Adele Author of Quicksilver Dreams. Thanks for Joining us!!

When I was in the 5th grade, I had a huge crush on Ricky Shroeder. I was a big fan of “Silver Spoons”, not surprising as I was absolutely the demographic for the show. He had the power to make my ‘tween heart flutter wildly with the twinkle of his blue eyes over a charming, boyish smile. One day I was home sick from school, and I wrote a fan letter. I was all excited. I’d never written one before. I sent it off and was giddy for days. I never heard back. Granted, technology has come a long way since then, become more efficient and widespread, and I’m probably dating myself here, but the feeling of not being really appreciated as a fan stuck with me. I remember feeling let down. Happily, I was pleased to learn that authors don’t roll that way.

As I took my first baby steps into the literary world a few short years ago, I was delighted to discover the amiable relationships authors worked to form with their fans. My expectation was that anyone who was publishing his/her work would be beyond the common person’s reach, just as my earlier experience had taught me. In my mind, I figured they were likely too busy, likely received a number of messages every day, likely couldn’t come out of their imaginations because of deadlines and such and wouldn’t have time for little old me, but to experience just the opposite was not only surprising, but very satisfying in a truly personal way. Facebook posts, newsletter updates, tweets, and websites have all worked to give readers the chance to know their favorite authors just a little more intimately, and from personal experience, I can say that it’s lovely.

The first really wonderful experience was when I discovered Christine Feehan’s Ghostwalker’s series. They were the kind of books that were serious page-turners, hard to put down and really just all-out steamy. I so enjoyed the series, was unable to look up for an entire summer from whatever chapter I was on, much to the dismay of my family, that I thought I’d go on her website and just leave a message of thanks for writing such a great series. As a reader, I loved that her work had given me hours of enjoyment, and just wanted to put some positive vibes out into the universe to show my appreciation. I was not expecting a response, but within a short time, I got one. It wasn’t long, but it was a friendly acknowledgement that she was glad I’d taken the time to read her books and was pleased that I’d enjoyed them.

Even as recently as a few weeks ago, I had a fun, incidental run-in with another of my favorite authors. My book, Quicksilver Dreams, the first book of the Dreamwalker series, was released on January 6th, and I was set to do a blog as well as a twitter chat for Harlequin about new adult romance. One of the questions we answered asked us to name a new adult romance novel that we’d read. I referenced Playing with Fire by Gena Showalter. Within a few hours, she retweeted the tweet. It might seem silly, but I was really excited.

I follow a number of my favorite authors on their facebook fan pages, enjoying getting to know their clever wit and wonderful senses of humor, which all comes out in their work and just reinforces why their work is so well received. A fan on Maya Bank’s facebook fan page stated Maya was an automatic buy. What a great compliment. What a great sentiment. By nurturing readers, I think authors can build lifelong fans as well as a mutually appreciative relationship. I’m new to the publishing world, and I hope to gain readers that have not only truly enjoyed my work, but want to come out of the woodwork to say a quick “hi” and get to know me. I look forward to that.

Danube Adele wrote her first romance at the age of seven when she penned the story of her dogs falling in love and having puppies. She’s been dreaming up romantic tales ever since. A lifetime resident of southern California, she spends time playing at the beach, camping in Joshua Tree National Park, and hiking Mammoth Mountain.

Always a lover of adventure, she and her husband took their sons on a cross country road trip to Florida and back in an old VW Westfalia, that had no A/C, in the month of July, and still, it continues to be the best trip they ever took. Extensive travel and trying new things has kept the creative spark alive. Danube lives in Claremont with her biggest fans, her loving husband, amazing and wonderful identical twin sons, and a teddy bear of a Rottweiler. 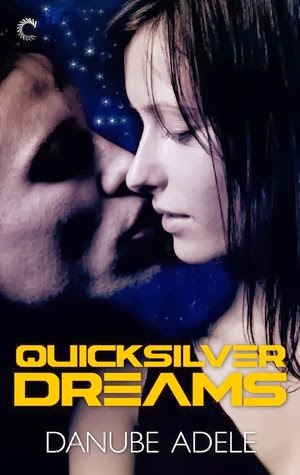 
My name is Taylor, and damn but my life changed overnight. One moment I was just a regular girl working two jobs to pay my bills, and next thing you know, I'm uncovering secret metal disks at my boss's house. Now I'm reading minds, dream-walking and being saved from bad guys by Mr. Dark and Brooding.

That would be Ryder Langston, my new next-door neighbor. He's sex on legs, but he's also a secret agent from another world—no joke. I believe him now, because he dragged me back here "for my protection" after he discovered someone was trying to assassinate me on Earth. It isn't working out so well.

There's a war going on, one that's been fought for generations. Ryder's having trust issues (not that it's stopping us from falling into bed), and it turns out I'm connected here, if you know what I mean. The target on my back finally makes sense, but there's nowhere left to hide…