Angels or Demons
I’ll be whatever ya want me to be, lassie.

Vampires or Shifters
My nephew, Niall, is a wulver. I think ya call them werewolves. He stole my favorite whiskey two hundred years ago. So vampires. I vote for vampire.

Left or Right, Up or Down
Did my brother tell ya I got them lost again? He lies. Someone moved the road.

YA or Adult
Ya want an adult? I dinna understand ya, lass, but we don’t need words when we speak the language of love.

Knives or Guns
Man’s weapons are no match for my special magic.

Reading or Writing
Writing. I’m taking over Michelle’s books. She keeps trying to make my nephews the heroes. I think all the ladies know who the real hero is. How you doin’?

Cable or Internet
Did I tell you about the kilts?

Morning or Night
Day. If it were night time 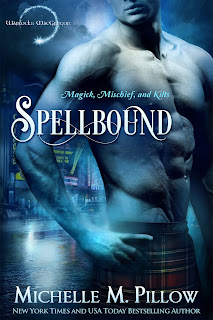 Iain MacGregor knows how his warlock family feels about outsiders discovering the truth of their powers, its forbidden. That doesn't seem to stop him from having accidental magickal discharges whenever he's around the woman who has captured his attention. Apparently his magick and other "parts" don't seem to care what the rules are, or that the object of his affection just might be his undoing.

Warning: Contains yummy, hot, mischievous MacGregor boys who may or may not be wearing clothing and who are almost certainly up to no good on their quest to find true love.

Taking a small pocket knife out of her cargo pants, she looked about. A mystic had once told her that if she left pieces of herself around while she lived, it would expand her haunting territory when she died. Jane wasn’t sure she believed in sideshow magic tricks—or the Old Magick as the mystic had spelled it on her sign. She had no idea what had possessed her to talk to the palm reader and ask about ghosts. Still, just in case, she was leaving her stamp all over the woods.

She cut her palm and pressed it to a nearby tree under a branch. Holding the wound to the rough bark stung at first, but then it made her feel better. This forest wouldn’t be a bad eternity.

The sound of running feet erupted behind her and she stiffened. No one ever came out here at night. She’d walked the woods hundreds of times. Her mind instantly went to the creepy girl ghosts chanting by the stream.

Jane whipped around, startled as a streak of naked flesh sprinted past her. The Scottish voice was met with loud cheers from those who followed him. “Water’s this way, lads, or my name isn’t Raibeart MacGregor, King of the Highlands!”

Another naked man dashed through the forest after him. “It smells of freedom.”

Jane stayed hidden in the branches, undetected, with her hand pressed to the bark.

“Aye, freedom from your proper Cait,” Raibeart answered, his voice coming through the dark where he’d disappeared into the trees.

“Murdoch, stop him before he reaches town. Cait will not teleport ya out of jail again,” a third man yelled, not running quite so fast. “Raibeart, ya are goin’ the wrong way!”

“Och, Angus, my Cait canna live without me,” Murdoch, the second streaker, answered. “She’ll always come to my rescue.”

“I said stop him, Murdoch, we’re new to this place.” Angus skidded to a stop and lifted his jaw, as if sensing he was being watched. He looked in her direction and instantly covered his manhood as his eyes caught Jane’s shocked face in the tree limbs. “Oh, lassie.”

“Oh, naked man,” Jane teased before she could stop herself.

“That I am,” Angus answered, “but there is an explanation for it.”

“Fergus, Angus, Murdoch, turn it around and call a meeting at once,” Raibeart shouted. “Something foul is afoot. Someone stole the water right off our land. The stream is not where I left it.”

“Raibeart stop ranting, ya drunkard, we have company,” Angus ordered. The shadows on his face shifted as he gave a sheepish grin. It was then she saw the similarities to Iain in his features.

“I’m ready, brother. I thought I smelled a bean nighe in the forest,” Raibeart appeared suddenly, almost too suddenly from where his voice had echoed from. His arms were raised as if he was ready to ward of whatever danger he might face. “Where is that devil’s harlot? I’m not scared of death!”

Raibeart looked at Angus in confusion, then at Jane. He stood frozen with his arms in the air. He sniffed in her direction. “She smells somewhat like a bean nighe, but she does not look like one. What kind of fight is this? She’s a wee slip of a lassie and far too young.”

Jane tried to subtly sniff her arm. She smelled a little like garden soil.

“Why? I’m not ashamed.” Raibeart obeyed despite his words and cupped his hands over his exposed manhood. It became clearer with each passing second that the men had been drinking heavily. To Jane, he said, “Come out of hiding. Ya do no’ look like a bean nighe. What are ya doin’ trespassing in the MacGregor forest in the middle of the night? Are ya a wulver? A shellycoat? I have a nephew who’s a wulver.”

“The MacGregor forest is that way.” Jane stepped away from the tree and pointed toward the direction the men had originally come from. She purposefully kept her eyes averted from their naked bodies. When she looked directly at them, it was only at their faces. “And he’s right. You’re going the wrong way if you want to reach the stream.”

“Where’s that bean nighe?” Though he had streaked past rather quickly, she recognized Murdoch. He stopped, covered himself and eyed her. “Ya don’t look like a bean nighe.”

“I don’t think I am one.” Jane didn’t really stop to consider her strange situation—standing in the woods in the middle of the night, talking to middle-aged naked MacGregors. Even with hands up ready to fight the men looked fairly harmless. Nothing about them set off warning bells.

“How can ya be certain?” Murdoch challenged.

“Pretty sure I’d know if I was a bean nighe. I think my dad might have mentioned it to me at some point growing up if I wasn’t human. Besides—”, she pointed over at Murdoch, “—he said that even though I smell bad, I am too young.”

“Not bad,” Raibeart corrected. “Just like ya have been swinging through the trees.”

“No. I don’t swing through trees,” Jane assured them.

“Don’t suppose you’ve seen an old washerwoman around here, have ya? Scrubbing away at some old clothes?” Raibeart inquired.

How did he know what she’d hallucinated?

“Don’t worry,” Raibeart soothed. “The old woman won’t want anything to do with ya. And if ya see her, look away quickly and just leave her be. Nothing but heartache there.”

“It’s just a myth,” Angus insisted, gritting his teeth as he gave Raibeart a look of warning. “He’s an idiot.”

“Nothing wrong with drinking every once and a while and blowing off steam,” Jane answered in mild defense of Raibeart.

“Och, no, lassie, he’s always an idiot,” Murdoch assured her.

Raibeart grinned. “If she’s not a shellycoat, can I keep her?”

“It’s settled. I’m marrying this one.” Raibeart winked at her. “As long as she’s not a wulver. Hairy buggers always clogging up the shower drain—hey, where’s Fergus? We lost Fergus.”

Jane lifted her hand. Blood had trailed down her fingers from the cut.

“Ya come home with us. My Cait will fix ya up,” Murdoch insisted.

“Oh, no, it’s just a scratch. I’m fine,” Jane tried to step back but her foot hit a rotted limb and she stumbled.

“She makes a salve that will leave nary a scar.” Clearly not taking no for an answer, he gestured his head for her to walk. “Best keep to the front of us being as you’re the only one dressed.”