UFI welcomes Sara Grant Author of Dark Parties. Thanks for Joining us!!

Thanks, Stacy, for inviting me on Urban Fantasy Investigations!

I’m not sure I could part with the few mementos I have saved from my teen years. These items may be priceless to me, but on the open market, I’m not sure they’d earn a penny – and I might be open to public ridicule. It won’t take you long to realize that I was a teen in the 1980s. I may regret being so honest, but here goes…

My complete Rick Springfield collection – I never watched General Hospital but I quickly fell for the voice behind Jessie’s Girl. Rick was the first concert I ever attended, and I still have the concert program. My best friend and I would watch the VHS she gave me of his music videos over and over – especially the part where he sighs in the opening of Souls (http://youtu.be/MhT97glh3zE). And this same friend and I had a ritual of studying for our college finals while listening to selections from each of Rick’s nine albums. Oh, yeah and I almost forgot… Hard to Hold – his full-length feature film. I watched that more times than I can count. (I may have to find a DVD of that for old-time’s sake.)

Collection of scripts – I wanted to be an actress. I was in every play and musical at my high school. I played Laurie in Oklahoma as well as lessor parts in Camelot, Crucible, Music Man, West Side Story, Up the Down Staircase, Ms. Frankenstein’s Monster, and loads of others I can’t – or don’t want to – remember. I’m so thankful that those were the days before YouTube. I think there’s a VHS of me in a few of these high school productions, but I certainly hope the tape will have degraded by now.

Big earrings – I had a different pair of earrings for every outfit. The bigger the better. None of them costs more than a few dollars. And I’m sure I’d be embarrassed to wear any of them today.

Hair accessories – It was the time of big hair and lots of hair spray. I proudly sported two-inch high bangs. I used a bottle of Stiff Stuff hairspray every few weeks. By the time I moved away for college, you couldn’t chisel the hairspray residue off my bedroom mirror. For some reason I now cannot for the life of me remember, during my senior year, I never styled my hair the same way twice in one week. I had an astounding array of bands, clips and bows. I think it was because it was the first time in my life that I had long hair – but who knows what my teen brain was thinking.

Poetry – Junior high and high school was my poetry phase. I wrote very bad, angst ridden poetry with titles such as Unnoticed Love and Tomorrow Never Comes. I can still recite these by heart – if you’re interested.

Celebrity Collage – My bedroom had a gabled ceiling. I cut out photos from celebrity magazines and created a collage of photos over my bed. I changed this masterpiece regularly depending on my current obsession. I can remember Tom Selleck, Jameson Parker, Shaun Cassidy as well as a selection of soap opera stars from Young and the Restless, As the World Turns, Capitol and Guiding Light.

Crush Mementos – Today it might be considered stalking, but through my high school years, I had a series of crushes – pretty much all unrequited*sigh*. I would fall head over heels and create secret shrines to the object of my affection. This usually consisted of: a photo secretly snapped and displayed in a decorative frame, items that he had touched (candy wrapper and even a lock of my hair), perhaps notes or letters, or newspaper articles when one was a high school basketball star, for example. These items were hidden under my bed or buried in the back of my closet in a shoe box.

So these are the trappings of my misspent youth. I wish I could claim well-worn copies of War and Peace or some humanitarian award rather than my certificate for senior class historian or some precious item of jewellery – other than the crown I received my senior year as Miss Choral Sweetheart. But, alas my mementos are more of a love-sick teen heavily influenced by teen mags with dreams of the big screen.
__________________________________

Sara Grant was born and raised in Washington, Indiana. She graduated from Indiana University in Bloomington, Indiana, with degrees in journalism and psychology, and later she earned a master’s degree in creative and life writing Goldsmiths College, University of London.

Sara is senior commissioning editor for Working Partners, a London- based company creating series fiction for children. She has worked on ten different series and edited more than 75 books. 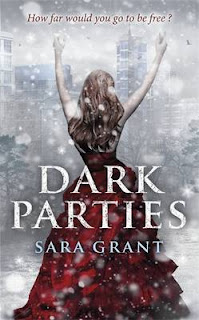 
Sixteen-year-old Neva has been trapped since birth. She was born and raised under the Protectosphere, in an isolated nation ruled by fear, lies, and xenophobia. A shield "protects" them from the outside world, but also locks the citizens inside. But there's nothing left on the outside, ever since the world collapsed from violent warfare. Or so the government says...

Neva and her best friend Sanna believe the government is lying and stage a "dark party" to recruit members for their underground rebellion. But as Neva begins to uncover the truth, she realizes she must question everything she's ever known, including the people she loves the most.