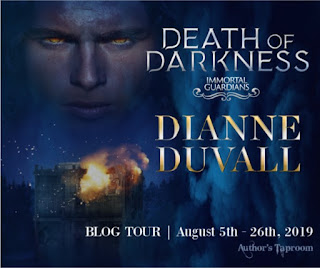 
Hello! Thank you for joining me. I’m so happy to be here at Urban Fantasy Investigations, celebrating the up-coming release of DEATH OF DARKNESS. If you like powerful preternatural heroes who adore strong women, intense action scenes that will keep you flipping pages well past your bedtime, and romance that is alternately steamy, tender and laced with humor, then I think you’ll enjoy this book.

To give you a glimpse of what you’ll find in my Immortal Guardians series (don’t worry if you’re new to it—each book can be read as a stand-alone, you’ll just know more about the secondary characters if you read them in order), I thought I would share some of my favorite quotes from DEATH OF DARKNESS.

Leah blinked and tried very hard not to gape again. That was definitely a doozy. “Like a werewolf?”

“Yes. But it’s entirely voluntary and has nothing to do with the moon. I can also shift into the shape of any living creature I wish to, not just that of a wolf. And I’m still me,” he hastened to assure her, “when I take an animal’s form. I don’t start thinking like an animal or anything like that.”

She stared at him.

“Yeah. You’re going to have to show me that one.”

He released her hand. “Is there any animal in particular you’d like me to change into?”
She shook her head. “Just… something that won’t make me pee my pants.”

He took so much upon himself to try to spare others. When she would’ve loosened her hold to look up at him, he tightened his arms around her.

“Let me hold you a little longer,” he whispered.

Nodding, she relaxed against him.

Several minutes passed while they just held each other.

“You make everything better, Leah,” he murmured.

Warmth burrowed through her chest, straight to her heart. “You do, too.”

Shaking his head, he closed the distance between them. “Don’t tempt me, minx.”

She grinned unrepentantly. “Think it would shock your fellow immortals if I made a habit of grabbing your ass in their presence?”

Again he laughed. “Everything you do where I’m concerned shocks my fellow immortals.”

She tapped on the bathroom door. “Ready for clothes?”

Leah stared. “Holy crap.” Seth was naked, save for a towel he had wrapped around his hips. And his body was pure perfection. His arms and legs both bore beautiful, thick muscle. But not too thick like some of the bodybuilders she’d seen whose arms and legs were so bulky they couldn’t rest their arms against their sides and seemed to walk bowlegged. Seth was built more like a professional basketball player. Broad shoulders. A well-developed chest. Even his abs rippled with muscle and begged to be touched.

Realizing she had been staring—aka drooling—she looked up at him. “Seriously, how are you still single?”

But Seth wasn’t looking at her face. His eyes were fastened on her body.

Her breath caught when a faint golden glow illuminated his dark brown irises.

“I was going to ask you the same thing,” he murmured, his voice deeper than usual and husky with what she thought might be desire.

A thrill rippling through her, Leah glanced down. Her eyes widened.

The rain that had found its way past the awning out front had plastered her pajamas to her skin, rendering them nearly transparent.

“Tonight, when the walls started closing in on me, I figured a drive in the country might be nice because I couldn’t think of anything else to do. Then I got here, you opened the door, and I thought: Oh crap, he’s going to think I’m a total stalker.”

“Not at all.” Seth raised their clasped hands and grinned. “I merely assumed you wanted to see my big hands again.”

Laughing, she gave his shoulder a shove. “You’re such a tease!”

His heart lightened. “Admitted without shame.”

“Well, I’ll forgive you,” she quipped, “because you’re letting me hold your hand.” Drawing their clasped hands closer to her face, she cupped her free hand over them and smoothed circles over his as she assumed a comical expression of amazement. “Oooooooh. So big,” she breathed. 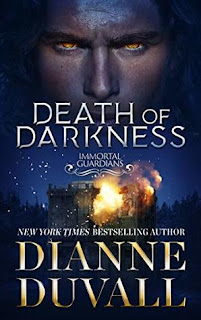 
Seth has led the Immortal Guardians for thousands of years. With them fighting by his side, he has protected humans from psychotic vampires, defeated corrupt mercenary armies, defended military bases under attack, and more. But the latest enemy to rise against the Immortal Guardians has proven to be a formidable one, wielding almost as much power as Seth. His goal is simple. He wants to watch the world burn. And he will use every means at his disposal to accomplish it. Seth and his Immortal Guardians have succeeded thus far in staving off Armageddon despite heartbreaking losses. But they have never before faced such danger. Seth has only one wish: to protect his Immortal Guardians family and ensure the continuation of humanity by defeating his foe. But then Leah walks into his life and sparks a new desire.

Leah Somerson has suffered losses of her own. It has taken her a long time to rebuild her life and find some semblance of peace. Then one night a tall, dark, powerful immortal with what appears to be the weight of the world on his shoulders stumbles into her shop, and everything changes. Peace and contentment are no longer enough. Now she wants more. She wants to find happiness. She wants to erase the darkness in Seth’s eyes and replace it with love and laughter. She knows he’s different in ways that make most fear him. Even some of his immortal brethren keep a careful distance. But Leah will not. Nor will she shy away when danger strikes.