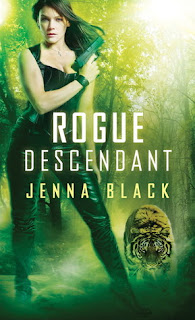 The third novel in an action-packed urban fantasy series from the acclaimed author of the Morgan Kingsley, Exorcist books—starring a female private eye who discovers that she’s an immortal huntress.

No longer the leader of the Olympians, Konstantin has now gone into hiding. Konstantin is vulnerable, and Anderson believes now is the perfect time to destroy his nemesis. He orders private eye Nikki Glass to use her powers to locate Konstantin, and she balks at the idea until a series of attacks leads her to believe that Konstantin is gunning for her and Anderson instead of remaining safely in hiding.

Nikki’s search is complicated by Cyrus—Konstantin’s son and the new leader of the Olympians—who threatens retribution should his father be killed. The complications mount up as Nikki begins to suspect that Konstantin might not be behind the attacks after all. The only person who hates Konstantin more than Anderson does is Anderson’s estranged wife, Emma, who has joined the Olympians. And Nikki knows Emma would be more than happy if Anderson and his people embroil themselves in an all-out war against the Olympians—a war they cannot hope to win.

As Nikki tries to figure out who the true enemy is, she deals with her tumultuous relationship with Jamaal, who struggles to control his death magic. But being loved by a descendant of a death goddess is the least of Nikki’s worries…


Nikki is back. Someone is attacking Nikki where it hurts most, her family. Her first thought is Konstantin but then she starts thinking it might be Emma. Either way she has to figure it out and stop it before the attacks get worse.

Nikki is still navigating her new life. She considers the mansion home now and finds herself getting more comfortable but still misses how things use to be. We get a brief glimpse of how she is with her adoptive parents when they come home from their trip which was interesting. I continue to enjoy the mythology of the series and the characters are by far what makes the book. The romance, My gosh are Nikki and Jamaal frustrating. One step forward five steps back. The tiger and her feelings do not help. I know this isn't a romance novel but watching their slow tip toeing is driving me insane. I want to scream, "Just do it already". Now we do learn more about Jamaal and the reason for his issues but I still hope issues will be worked through in book 4 *fingers crossed*. There is not a romance with Anderson but we do learn about some feelings and he is still very much a mystery.

ROGUE DESCENDANT didn't have much of an adventurous plot. There was some action at points but it wasn't go, go, go like the other two books in the series. It is definitely a turning point as it ends with something big but it felt like more of a filler novel. I still liked ROGUE DESCENDANT and couldn't imagine not reading it but I'm hoping to get back into the swing of things with book 4.