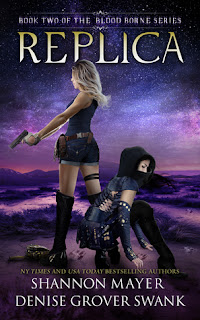 When the sun rises, the nightmares are supposed to fade . . .this time, they don’t.

An expose on the dangerous experiments Rachel and Lea uncovered with the Asclepius project turns the world against them.

Except for a single man who claims he knows about a hidden plan to complete what was started with Asclepius.

Faced with complications they could never have foreseen, and hunted by new and terrifying factions, once more they are in a race against time.

With a new set of clues to decipher.

A werewolf who claims he’s their friend.

This time either the two strong willed women will finally learn to trust one another . . . or end up watching one another die.


I enjoyed REPLICA more than RECOMBINANT.

I was really glad to see that Rachel and Lea weren't separated like I thought they were at the end of RECOMBINANT. I wasn't sure how that would work and I am glad that I didn't have to find out. They still have a few kinks to work out, but they truly make a great team and I enjoy both of their characters.

The addition of two new character was a bit iffy at first, but one in particular grew on me fast and I hope he sticks around for books to come. I think there is definitely something there between them and one of our main girls. The other still hasn't won me over, but I think when we learn more about them they just might grow on me. Our other main girl might have something with them, but right now there she doesn't trust them enough to explore the spark.

The transition from scene to scene could have been smoother. This happened in RECOMBINANT with going from POV to POV, but with REPLICA it was event to event. There were more than a handful of times that I had to swipe back a page on my Kindle because I was reading and all of a sudden we were in another place or another day and I thought maybe I skipped a page on accident. I didn't, the transition was just too fast and the last even was left unfinished in my mind.

REPLICA did a good job of growing the characters and the Blood Borne world. The story moved at a much faster pace than book one, and the events had a lot of action to keep my mind pumping. The ending was pretty jaw dropping and I plan to read book three when it's available.