UFI welcomes Author Vivien Jackson. Thanks for Joining us!!


What can you tell my readers about yourself that they might not know from looking on your bio or reading in another interview?
I’m a huge gamer: board, PC, Xbox, RPG, you name it. I won two role-playing awards at a con in ’95 for playing AD&D and Vampire: The Masquerade. My family and I stalk PAX-South in San Antonio every year, and I have been known to go out during an ice storm to a purchase a much-anticipated game on release day. It’s a sickness, but probably not fatal. We don’t get a whole lot of ice storms in Central Texas.

What do you enjoy doing on your down time?
I mom for two kids, wife for a dude, and obey two very exacting Chihuahuas and the occasional visiting cat. Sometimes, the kids sleep, and then I either play games or read books. Unless we’re in the middle of a Game of Thrones or Doctor Who season, and then I have a standing date with the DVR.What is your Favorite part of writing?
Falling in love with the characters. Hands down, they are the brightest magic. Someday, if I do my job well enough, readers will love them as much as I do.Do you have any certain routines you must follow as you write?
It’s funny, some writing buddies and I were talking the other day about deadline food: you know, the stuff you eat when you’re barreling toward a deadline and don’t dare fall asleep because the story might slink away in the dark? I hear the all-cake-all-the-time diet works for some folks, but if I ingest sugar I’ll fall asleep right on my keyboard. So mostly I eat protein bars and breakfast tacos and drink a lot of coffee and wine. My mom sent me a news clipping (from an actual newspaper! I know! Relic!) that gave scientific evidence supporting a coffee+beer one-two punch to increase focus and happy thoughts. So now I feel all justified in my poor nutrition habits. Thanks, Mom!What are some of your Favorite books or Authors in the Urban Fantasy/Paranormal Genres?
So, so many. Too many! But I’ll try to keep the list as shortish as possible, so readers don’t fall asleep (see above regarding efficacy of coffee+booze). On the urban fantasy side, I dig Richard Kadrey’s Sandman Slim and Chuck Wendig’s Miriam Black books, but my all-time favorite is Darynda Jones’s Charley Davidson series. (Or is that one PNR? It does have kissing and Hottie McYumface, Reyes Farrow, but it’s also first-person, supernatural female badassery, so I dunno.) I just started on Nalini Singh’s Psy/Changeling series – I know, I’m way behind the cool kids on this one, since book 19 is set to come out this summer – and I’m liking it a lot, even though shifters aren’t usually my thing. My go-to re-readable PNR is Jax Garren’s Underlight series, which is set in my hometown, Austin, and just nails the weird/cool/Texan vibe.
__________________________________

VIVIEN JACKSON is still waiting for her Hogwarts letter. In the meantime, she writes, mostly fantastical or futuristic or kissing-related stories. When she isn’t writing, she’s performing a sacred duty nurturing the next generation of Whovian Browncoat Sindarin Jedi gamers, and their little dogs too. With her similarly geeky partner, she lives in Austin, Texas, and watches a lot of football. 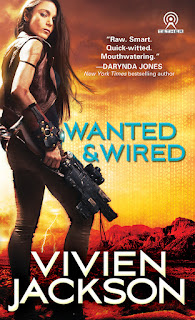 
A rip-roarin' new snarky, sexy sci-fi paranormal romance series with the perfect balance of humor, heat, and heart. Now that Texas has seceded and the world is spiraling into chaos, good guys come in unlikely packages and love sprouts in the most inconvenient places...

Rogue scientist • technologically enhanced • deliciously attractive
Heron Farad should be dead. But technology has made him the man he is today. Now he heads a crew of uniquely skilled outsiders who fight to salvage what's left of humanity: art, artifacts, books, ideas-sometimes even people. People like Mari Vallejo.

Gun for hire • Texan rebel • always hits her mark
Mari has been lusting after her mysterious handler for months. But when a by-the-book hit goes horribly sideways, she and Heron land on the universal most wanted list. Someone set them up. Desperate and on the run, they must trust each other to survive, while hiding devastating secrets. As their explosive chemistry heats up, it's the perfect storm..