That I am pretty mushy. I like cartoons and kids’ Christmas movies…I listen to Christmas music all year round. I drive my loved ones crazy.

Down time? What’s that? I never have downtime. LOL. I’ve been accused of being a workaholic and I am ashamed to admit it’s true. I blame my father. I got my first job as a kid. I really did. Working for him. In hindsight, it was cruel (I was only 7) and he worked the Royal Agricultural Show circuit in Australia. Being a single parent, he didn’t know what else to do with me and my brothers, so we went with him. I got used to working and helping, and I saw a side of life that most people never see. I’ve actually adapted some of these experiences into my free paranormal carny chapters/stories available on my website. It’s called The Twelfth of Never. So you see, I never stop working!

Research. I love it! It’s an essential part of my job (

That’s an interesting question. I get asked it a lot and used to poo-poo it, but I do. It took me a long time to accept that I have a routine. A ritual.

I start writing very early in the morning and there are some “must follows” for me. For example, I have a shower first. Then, the bed must be made. There must be no dishes that need to be washed in the sink, the animals need to be fed and finally, gotta have a cuppa coffee handy!

Oh man, where do I start? Argggh…the queen of the genre for me would have to be Charlaine Harris and her Sookie Stackhouse series. I also love Cassandra Clare’s Mortal Instruments. I feel sorry for Cassandra, and her fans, because the movie based on City of Bones was a disaster and had nothing to do with her awesome books.

I am glad the studio’s scrapped the idea of other movies in the series and I hear they’re doing a series.
I also love Chloe Neill’s Chicagoland Vampires. I love her sense of humor!

How would you pitch Makahiki: The Last Warrior Book 3 to someone who has not heard of it before?

This is the third book in my own urban fantasy/paranormal series and it’s good! You’ll love it. Honest! It’s not a stand-alone, but it’s a wild ride and I think it’s unlike any other book out there.

Can you tell us a little bit about the world that Makahiki: The Last Warrior Book 3 is set in?

Yes, I’d love to! Lio Pakai is a young man working as a steeplejack in Waikiki, Hawaii with his dad. Lio’s had a tough life after being raised by an abusive mother and he’s finally found happiness being reunited with his father and his new family. He’s also found the love of his life, Kord Ashley, when weird things start to happen.

Lio’s an ordinary guy just trying to navigate this world when dreams he had as a kid of an ancient warrior start to come back to him. He’s terrified at first, then he’s suddenly plunged into the past, into the violent world of old Hawaii, where he was the king of Oahu’s Last Warrior.

He discovers that the ancient island gods want Lio – in his previous form as ‘Ailani, to avenge wrongs being committed in the islands. Both in the past and current crimes. He’s a sort of Hawaiian superman!

Do you have a favorite scene in Makahiki: The Last Warrior Book 3?

Yes, I love when Lio’s entire family goes to the hospital to help welcome his new baby brother into the world and poor Lio leaves to get something for his stepmother and somehow plunged back several hundred years into the past and finds himself in the middle of a Makahiki celebration. That’s where the title comes from. It was an old custom celebrating New Year in the islands and went on for days.

As joyous as this festival is, Lio realizes something sinister is afoot…somebody’s trying to murder him.

Which character was your favorite to write about? What about the hardest to write
about?

I love them all! I love Lio’s family. I am so glad my readers have taken them to their hearts as well. The hardest character to write was his mother. She is based on somebody I know, so she’s accurate and real, but not very nice.

I have a lot of books simmering, a few on the boil – and oh my! Please check my website for all my news and updates. I have a ton of free reads including three different blog series that are all updated regularly with new chapters. 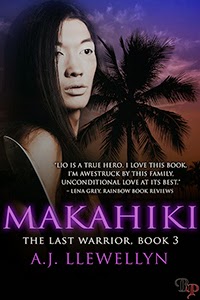 
On the anniversary of the ancient Makahiki festival once celebrated in the islands, Lio Paiaki, reincarnated warrior of the lost kingdom of Hawaii, is sent back in time to face his most dangerous enemy yet: himself.


In the final chapter of the exciting Last Warrior series, Lio Paikai rushes to the hospital with his lover, Kord, for the birth of his baby brother, Lono. They're soon waylaid however, by traffic on the Pali Highway.

Not by cars, but foot traffic. He and Kord, who once were warriors for the last king of Oahu, have intercepted an ancient procession of devotees marching down the old Pali for the Makahiki. They're stunned to learn dark kahuna forces plan to provide a blood sacrifice for the New Year festival.

The sacrifice they have inadvertently crossed paths with is Lio's. He must right past wrongs--or there won't be any future for him or the man he loves.

Kord locked our bedroom door and shoved a chair under the handle. He took my face in his hands and gave me a gentle kiss before checking that he'd activated the window alarms. He was the most protective man I knew.

When he finally turned and took me in his arms, my soul stopped screaming. I felt as if I'd waited forever to be naked and alone with Kord, but it had only been hours. We'd sneaked in a quickie before chaperoning Louie's date, but it hadn't taken the edge off our passions. We stripped each other quickly, leaving our clothes in pools around our feet.

I could hear the faint drone of the TV and realized how lucky my dad and I were to have fallen into the magic love pot that was the Ashley family. Marcella and Kord were the most astonishing people I'd ever met. Their capacity for love, their warmth, and—oh, Kord blazed a trail across my throat with hot, peppery kisses, pushing me gently down to the floor.

My cock stood up, proud and pleased as heck to see him. He knelt beside me, smiling down at me.

"We could take this to the bed," I whispered.

"I want you right here," he said, as I fondled his huge, thick cock, which jutted toward me. Yep, it knew who loved it.

I lay on my back, letting his fingers and lips roam my body. In the semidark room my parents had designated for me when they first bought the house, I smiled, thinking how far we'd come. When we first agreed to move in and stay in case my parents needed to rush to the hospital, we were embarrassed to make love. We'd even made emergency dashes back to our
house down the road for furtive fumbles.

Now we were much more comfortable.

Kord brushed my fingers away when I tried to hold on to his cock. He got to his feet, and I kept my gaze glued to his magnificent erection as he walked over to the corner of our room.

My cock seemed to get harder as he walked back to me. Man, I could never get enough of seeing his gorgeous, hard body. And it was mine. All mine!

I turned my head, trying to see what he was doing, but I already knew. He walked back with the didgeridoo, the long, natural wood trumpet my brother had carved for us as a Christmas gift.

We loved the lush, vibrating sounds it made and knew the didgeridoo had first been crafted by Australian aborigines, but the early, indigenous Hawaiians shared many similarities with other tribal cultures. My lover had had dreams of himself in his warrior lifetime, playing the instrument.
He didn't mention to Louie what he was playing, but he'd demonstrated it to me the first night we were alone with it.

Kord stood beside me. "Ready?" he asked, his voice thick with desire.

I thought I would come before he'd even had the chance to do his thing. He moved back slightly, and I closed my eyes. I heard him moving to the top of my head. Next thing I knew, he was blowing into the long, hollowed tubing, and the unusual vibrations of sound washed over
me. I held my breath, wanting to enjoy every second of this sensual experience.

Kord kept blowing into the wood, holding it mere inches from my body as he moved from head to toe. When he reached my cock, the sounds he was making made it leap.

He slid to my feet as my body trembled in anticipation. The waves of pleasure engulfed me. The first time he'd done this to me, I came before he even made it inside me.

"Don't you come!" he insisted, dropping the didgeridoo beside him.

I opened my hazy eyes and found him scrambling to get between my legs. We had no lube handy, but we were both leaking all over the place.

"Wait, wait!" he demanded, but I came the moment I saw his gargantuan cock poised at my asshole. Knowing it was for me and knowing how good it would make me feel sent me over the edge. I came hard, with Kord pressing my knees toward my chest, scooping up my juices to prepare me for him. He stroked feverishly at my hole, and I begged him to fuck me.

My whole body still vibrated from the wild sounds of the instrument. He entered me hard and fast, and I saw stars as he pounded me, muttering my name, his slick fingers at my mouth.

He came deep inside me, and I clung to him.

"Do that again," I said against his lips. I heard his heart beating against my own. Fast, out of control, aflame with lust.

Just how I liked it.

He stayed inside me, kissing me, his tongue lashing against mine. We remained that way, entwined. I loved the feel of him inside me, above me. Laying claim to my body. I wrapped my
legs and arms around him, and he moaned.