One of the fun things about writing urban fantasy (other than the chance to introduce some really hot heroes and give them special skills, of course) is the worldbuilding.
In the case of my Sentinels of New Orleans series, my post-Hurricane Katrina hometown was the blank canvas upon which I built the magical world of a young wizard named DJ and her job as sentinel—sort of a border guard between the human world and the preternatural world called the Beyond.  A border, I might add, that collapsed during Hurricane Katrina, leaving New Orleans vulnerable to the flood of paranormal critters that flooded in.
When the hurricane strips away the things DJ has used to define herself—her mentor, her job, her city—she’s forced to step outside her sheltered life and learn more about the world she inhabits. I wanted her to be both a woman fighting for recognition in the male-dominated halls of magical power and someone who respects authority but also isn’t afraid to be a little entrepreneurial in her problem-solving.
For inspiration in forming DJ’s world, I had only to look as far as the TV screen. Let’s see….where do we have leaders of different political persuasions embroiled in constant power plays, bickering, and one-upmanship? Oh yeah, that would be Washington. And note that I wrote even the newest book, BELLE CHASSE, back in late 2014, waaaay before the recent presidential election began. So don’t read anything partisan into this blog post because it isn’t there.
“Politicians Behaving Badly” is bipartisan, and the top group of wizards isn’t called the “Congress of Elders” for nothing.
The Elders are senior wizards who represent four “parties,” or congresses, each with its own partisan interests. The Green Congress wizards, of which DJ is a member, perform geeky ritual magic. Red Congress wizards are flashy physical-magic users, while Blue Congress wizards are the creative types, and the Yellows are the intellectuals.
Reds are controlling bullies; Greens want to take things apart and rearrange them until everyone around them dies of boredom; Blues whine a lot and seek the pity vote; Yellows want to talk everything to death.
Of course, the preternatural world extends beyond the wizards and their congresses, and once Katrina tears down the borders, some of the other citizens of the preternatural world show up with their own power structures. As they argue over border control, the wizards are forced to join an Interspecies Council—think of the United Nations with fangs and wands and scary brainwashing skills.
There are the Elves, ruled by a four-member Synod and with their own internal power struggles. The vampires have Regents, fanged dictators who allow no dissention within their ranks. The historical undead—famous former humans granted immortality by the magic of human memory—are eclectic and disorganized, which allows the undead 19th-century French pirate Jean Lafitte, their unofficial leader, to do pretty much as he wants. The water species—merfolk and nymphs and naiads—tend to be territorial isolationists.
Into this political maelstrom comes our stubborn, somewhat geeky heroine and her entourage: a smokin’-hot shapeshifter, a troubled rogue werewolf, the ever-helpful undead pirate Jean Lafitte; and an adventurous tattooed Cajun merman named Rene.
As she navigates the twists and turns of her political bayou, DJ’s going to need all the help she can get.
__________________________________

Suzanne Johnson is the author of the award-winning Sentinels of New Orleans urban fantasy series but perhaps is best known for her romantic suspense and paranormal romance books written as Susannah Sandlin, including the Penton Vampire Legacy paranormal romance series, the Wilds of the Bayou suspense series, and The Collectors romantic thriller series. Her awards include two Holt Medallions in 2013 and 2015, a 2015 Booksellers Best Award in romantic suspense, and nominations in 2014 and 2015 for the RT Book Reviews Reviewers Choice Award. A displaced New Orleanian, she currently lives in Auburn, Alabama. Suzanne loves SEC football, fried gator on a stick, all things Cajun, and redneck reality TV. 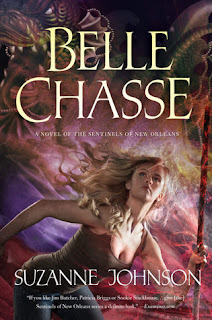 
With the wizard-elven treaty on the verge of collapse, the preternatural world stands on the brink of war. Unless former wizard sentinel DJ Jaco manages to keep the elven leader, Quince Randolph, focused on peace and not personal matters.

With no one on the throne, Faerie is in chaos, with rival princes battling for power. The still-undead pirate, Jean Lafitte, is building his own army of misfits, and DJ—stripped of her job and hiding in the Beyond to avoid the death sentence handed down by the wizard Council of Elders—can’t get anywhere near her beloved New Orleans or her significant something-or-other, Alex.

It's time to choose sides. Friends will become enemies, enemies will become allies, and not everyone will survive. DJ and her friends will learn a hard lesson: sometimes, even the ultimate sacrifice isn’t enough.

I expected Christof to start a snowstorm above Rand’s head. What I didn’t expect was for the prince to lower his head and charge Rand like a raging bull, head-butting him in the midsection. They hit the ground, and I saw my chance at the same time Eugenie spotted me.
I motioned her toward the woods where the transport lay. To hell with the Blue Congress wizards. We were going to make a run for it while Christof kept Rand too busy to notice.
She set off for the woods, and I met her halfway. “My family thinks I’m crazy!” she wailed, loud enough to draw the attention of the tall, skinny Blue Congress wizard with the rooster haircut.
“Hey, stop!”
Holy crap. I whipped out the elven staff, paused long enough to aim just to the right of the wizards. They already had their hands up and were doing some of their nifty Blue Congress magic when I released my fire and blew up the tombstone next to them, sending a rain of marble and playing cards onto their heads. Around us, evidence of their magic appeared as tombstones began moving to block our escape route.
I grabbed Eugenie’s arm and pulled her around a marble stag the size of a small SUV. It had lowered its head and pawed the ground as if to charge. Blue Congress magic was so damned cool— create and re-create.
“Stop, DJ!” Eugenie grabbed my arm as I tried to race past her. “A sinkhole!”
I looked stupidly at the ground in front of us, which had opened a gulf big enough to drive a Greyhound bus into. “Go around and run fast,” I shouted, sending another shot of the staff toward the Blue Congress wizards and blowing up a ginormous marble eagle perched atop a nearby tomb.
We didn’t stop to see if the stag was chasing us, but ran for all we were worth. Finally, at the edge of the tree line, I hazarded a look back at Christof and Rand. The faery stood watching us; the elf had crumpled on the ground. Not dead, though, because in my head, far behind my protective barriers, I heard him yelling my name.
Christof grinned and motioned for us to move along. He didn’t have to motion twice, because the wizards were chasing us, still chanting and doing their finger dance. The stag was getting way too close.
I raised the staff and blew a hole in the earth in front of the advancing stag, forcing him to change direction. Luck was on our side for a change— the stag began charging toward the wizards instead, who had to stop pursuing us in order to protect themselves from being trampled beneath marble hooves.
“Let’s run to the transport before those idiot wizards can get out from under the stag.” I grabbed Eugenie’s hand and we ran to the clearing. “Help me roll this werewolf out of the transport.”
To her credit, she didn’t ask a single question. We tipped the werewolf onto his side and rolled him outside the interlocking circle and triangle, leaving him at an awkward angle with his
feet in the air. Oh well.
I touched the staff to the edge of the transport and said, “Winter Palace, Faery” just before the Blue Congress wizards reached the edge of the clearing. I waved at them as the transport sucked the air out of my lungs. They were too late.
As soon as we materialized on the round floor of ice in the Winter Palace, Eugenie screamed. I figured she was getting her first look at the grisly remains of Faerie Princess Tamara until a blinding light knocked me off my feet and a big crack appeared in the ice between us.
“Where is my brother?”
I whirled to see Florian sitting on a block of ice behind us bundled in a heavy coat, a blanket spread beneath him, no doubt to protect his royal assets from getting cold and wet.
“He’s in Shreveport, Louisiana, at Our Lady of Perpetual Help church, having a fi stfi ght with an elf,” I said, pretty confident that of all the things he might expect me to say, that wasn’t it.