UFI welcomes Author Calinda B. Thanks for Joining us!!

On Crows and Mythology and Crow’s Caw at Nightmoon Creek


One of my favorite side effects about being an author is learning cool facts about the world through fiction. Every writer has to maintain a plausibility factor when crafting a story.  I always aim to write stories that both stretch the imagination and lay grounded in a framework of fact.

Writing about shape shifters always intrigues me. An avid nature lover, as well as explorer of the great outdoors both on land and under the sea, I’m fascinated by the animal kingdom. Whether I’m out on an adventure, or watching out the window of my home, I study and observe animals, birds, sea mammals, fish – anything that catches my eye. In my worldview, animals possess intelligence we often overlook, simply because they don’t possess qualities of speech. Crows have often been a favorite topic of study.

The first time I saw a crow flying high and dropping a sea-treat -- a clam, or maybe a mussel -- over and over on the asphalt until it became cracked and ready for consumption, I knew I loved their ingenuity. I later learned they’re extremely intelligent, and finding ways to crack open supper is only the start. In fact, it’s estimated they’re as smart as a seven year old human. They can solve complex problems like water displacement to get a drink, plus, they’re the only non-primate species to be able to fashion tools from sticks and such to get grubs and bugs out of hiding places. Speaking of hiding places, they’ve been known to cache food in a two-hundred mile radius, recalling where they hid it for over nine months. I doubt if I could recall the exact placement of food storage over two-hundred miles, unless I relied on GPS.

Crows possess uncanny communication skills. They’ll remember the features of one who has harmed them, passing this knowledge on to their friends and family.  In Chatham, Ontario, crows used to use the town as a migration stop, destroying crops and causing general mayhem. The townspeople went on the offense, declaring war on crows. A single crow was killed. The very next day the crowd of mischief making crows left, alerting crows far and wide. Now, crows fly high over Chatham to avoid getting hit. Only one crow in half a million suffered a fatality.

In mythology, the crow is often seen as one who ushers the soul of the departed to the other side. Celtic goddesses were said to assume the form of a crow, gathering over battlefields to consume the flesh of the dead. Seeing a crow or a raven before going into battle meant impending doom for the witness’ army.

Excited by all this information, I set to craft the character of a crow shifter, Mercedes McCartney. Her character is that of a warrior type, one who supports and encourages the downtrodden. Throughout the book, she searches for her life purpose, hoping she’ll usher souls to the other side.

And then I got stuck on crow behavior. I mean, we’ve all seen it…a crow feasting on roadkill by the side of the road. How could my character reconcile said behavior with her human self? The only way I could come up with implied having plenty of time prior to shifting to digest in crow form, otherwise, her human brain would rebel and…you guessed it…there goes her lunch, splattered all over the sidewalk or forest floor.

Mercedes loves to spread her wings and soar into the sky. I imagined it like when I scuba dive – I float, effortlessly through the water column, buoyed and buffeted by currents of water, much like currents of air. She loves to spy on people, knowing they probably won’t pay her any mind – she’s “only” a crow. I had loads of fun developing this story.

I hope you have a chance to read Crow’s Caw at Nightmoon Creek, as well as all the stories in the Woodland Creek series. We had a great time working together, conspiring, celebrating and are happy to share our stories with you, as well as the many ways we learned and developed our shifter stories. I’m sure I’m not the only one who learns interesting facts along the way to writing The End. As you read our stories, you might find out you learn a fact or two, as well. Enjoy Woodland Creek! 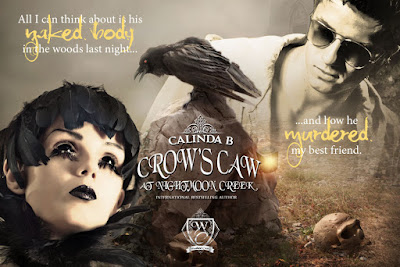 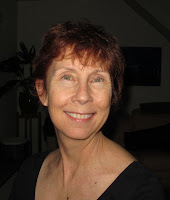 With seventeen books roaming the universe and more in her head, you can find her at www.calindab.com. 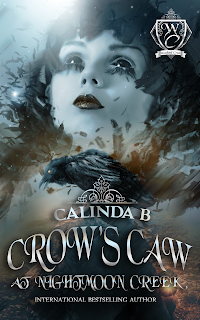 
This is a standalone paranormal shifter romance.

Flying through the night sky is amazing...especially when you're a spy.

Tall, athletic Mercedes McCartney is good at what she does – shaping clay into art. Supporting the downtrodden in the town of Woodland Creek. Oh – and transforming herself into a crow to fly the night sky, the wind in her feathers, soaring over landscapes, vistas and endless wonder as she sources secrets and eavesdrops on people's folly.

Coming back to Earth sucks...unless you uncover the truth.

Mercedes is horrified when she comes upon the dead body of her best friend, Elena Iris, at her favorite place, Nightmoon Creek. Nearby, stands the very much alive hot guy she’s been pursuing, Lennon Lusk. He's a suspect. She's a suspect. Mercedes' next mission becomes a big one – find out who really killed Elena, even if it means sacrificing her lust for Lusk.

She needs answers, fast. Her best clues come from a cat named Muffin and following her instinct, spying on the townsfolk. She uncovers secrets, lies and plots that fracture the calm appearance Woodland Creek presents. Only insiders know the truth. And insiders want Mercedes McCartney dead.

Get ready to fly into mystery. Buy Crow's Caw at Nightmoon Creek.