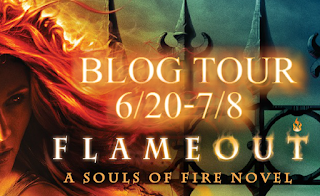 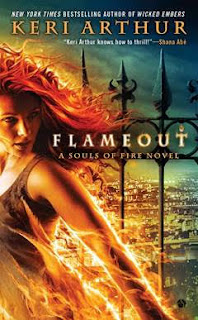 
Emberly and her red hot partner, Jackson, have hit an impasse in their battle against the crazed humans infected by a plague-like virus derived from vampire blood. Their quest to unearth the leader of the group leads them into an ambush—and leaves Emberly at odds with her former lover, Sam, who’s pressuring her to join his Paranormal Investigations Team.

To make matters worse, three local witches have been kidnapped—and if their spells fall into the wrong hands, Emberly’s powers could end up smothered. With time ticking until the virus consumes the world, Emberly and Jackson must race to save the witches, find a cure, and smoke out their nemesis—or go down in a blaze of glory...


I'm finding FLAMEOUT a little hard to review. I have really enjoyed the characters of this series as well as the storylines, but FLAMEOUT was not my favorite installment of the Souls of Fire series so far and I can't put my finger on what it is that makes me feel that way. I will try to figure it out as I write this review.

Let's just jump right in. The relationship between Emberly and Jackson has just sort of lost it's luster to me. FLAMEOUT has the characters hiding out and constantly on the move so they don't really have the time to connect and some other things came out in FLAMEOUT that makes me think that their relationship was meant to feel like that at this point. Then there is the person she loves in this lifetime, Sam. He seems to be a little more open to her, but I don't know if anything will ever come to that or if Emberly will be in a position to actually take him if he wants her. There is a lot of hurt there.

On top of the lack-luster relationship part of the book, I felt like I was reading the first two books in the series. I wanted something to really make FLAMEOUT stand out. Although it developed the overall series storyline, I didn't really feel that anything HUGE happened to set it apart from the other books until the end. There is a LOT of feels going on at the end of FLAMEOUT. Tons of action and a little something I saw coming, but didn't think would really happen. I honestly have NO clue what will happen next. I will admit that I was a little devastated though.

Ok, I guess I figured out what my issues were after all. No matter what, FLAMEOUT is a continuation of the overall storyline of the series. If you have enjoyed it so far, FLAMEOUT can not be skipped, you must pick up a copy and find out what happens next. The ending alone makes me want to read more.