Review: Wrong Side of Dead by Kelly Meding 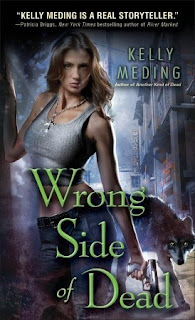 
Monster hunter Evangeline Stone woke up on the wrong side of dead this morning—and now there’s hell to pay.

Barely recovered from her extended torture at the hands of mad scientist Walter Thackery, Evy can use a break. What she gets instead is a war, as the battered Triads that keep Dreg City safe find themselves under attack by half-Blood vampires who have somehow retained their reason, making them twice as lethal. Worse, the Halfies are joined by a breed of were-creature long believed extinct—back and more dangerous than ever. Meanwhile, Evy’s attempts at reconciliation with the man she loves take a hit after Wyatt is viciously assaulted—an attack traced to Thackery, who has not given up his quest to exterminate all vampires . . . even if he has to destroy Dreg City to do it. With Wyatt’s time running out, another threat emerges from the shadows and a staggering betrayal shatters the fragile alliance between the Triads, vampires, and shapeshifters, turning Evy’s world upside down forever.

WRONG SIDE OF DEAD ended up being my favorite Dreg City book yet. Its been a few months since the events of book 3 ANOTHER KIND OF DEAD. The story jumps a bit between the past (couple months ago) and the present day. There were a few points that that got a bit annoying but only because something good or suspenseful was going on and I was impatient to find out what would happen next.

I couldn't imagine a better fit in the series then Evy and Wyatt. They have been through so many ups and downs that you would think they could survive anything at this point but Evy's latest kidnapping really did a number on both of them and they are on a break when WRONG SIDE OF DEAD starts. We get taken through a lot of growing, soul searching and realizations. It was very easy to imagine being in the story with them. Kelly did a fantastic job conveying feelings and situations. All of the characters in the Dreg City Series are very strongly portrayed. I can picture the way they look and the way they act when they are described. There wasn't as much action as in previous books but the emotion was high and it still left me flipping the pages to find out what would happen next.

If you are new to the series you really should start with book 1, Evy has been through A LOT. She has been tortured, she has died, she has come back to life in a new body, she has been tortured again. There is way to much back story that you would miss if you jumped in at this point and its worth starting at the beginning. I don't think this is the last book in the series but if it ended up being the last I would be happy with where it ended. This is a great darker urban fantasy series to add to your book shelf.