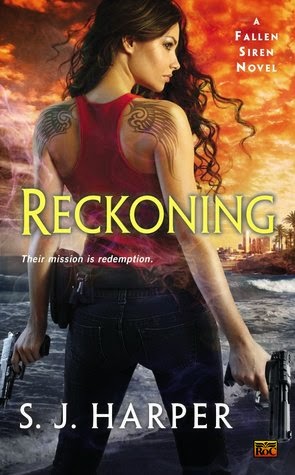 Special Agent Emma Monroe has a secret. She’s a Fallen Siren, cursed by the gods and banished to Earth for her failure to prevent the kidnapping of Persephone. As an FBI agent she saves the lives of others believing redemption could be one rescue away.

Her partner Zack is a werewolf and former Black Ops sniper who once carried out a string of questionable assignments. Now he’s determined to atone for his past. Ironically, there’s a portion of his past Zack doesn’t remember—an affair with Emma. Giving into their attraction for one another almost led to their undoing. Now it’s back to business as usual.

While trying to unravel the mystery behind a series of kidnappings in Southern California, Emma and Zack become entangled with political tensions in the vampire and Were worlds. Not to mention the struggles they face in their relationship with one another. With so much uncertainty, they come to realize the only thing they can really count on is one another…or can they?


I think I actually ended up liking RECKONING a tad bit more than book 1. I was really able to connect to the characters and story, not having to play catch-up with the background and world building was nice. I really enjoyed the mystery behind the case Emma and Zack were working. The authors did a great job of keeping me guessing.

Love interests: Interesting enough, Emma is 'dating' Kallistos , the vampire king, when the books starts off. They have a nice arrangement going, but to me it felt a little deeper on his part than it was supposed to be. They do fit together nicely, but knowing she loves another kind of turned me off to their relationship.

We all know what happened between Zack and Emma in CURSED. RECKONING just has them as partners in a business sense. Zack remembers nothing of their time together, but he knows something is missing from his life and he does make his feelings known to Emma at a few points in time. Emma really does want to be with him, but doesn't want to put him in danger. Some stuff happens with Demeter and just when I thought I was beginning to like her she had to go and show how much of a cold biatch she really is. The book does not end with Emma and Zack on good terms. Lots of relationship drama going on for an urban fantasy, but I'm not complaining in the least.

I look forward to the next book. Watching Emma struggle with her feelings and working hard to hopefully someday break her curse makes it easy to root for her to succeed. The action and romance that's thrown in makes the story that much better.