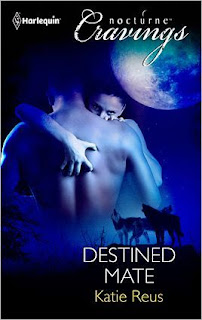 Two hundred years ago, Angela Lavigne and Alpha werewolf Knox had a shared a passion neither could control. Then Angela was turned into a vampire and disappeared.The last thing Knox expects is for Angela to show up on his doorstep centuries later on a rescue mission, as sexy and irresistible as ever. And he can sense how much she still wants him, too. She's gone against both their species' rules and trespassed on his land. By law he can keep her as long as he wants—and Knox doesn't intend to let her go ever again.
As their desire explodes once again, Knox is more sure than ever that he's must claim her forever. But as vampire and werewolf, they are natural born enemies. Can she truly be his destined mate?

Angela and Knox where in love a long time ago and then Angela was turned into a vampire against her will and took off. Knox hated everything and everyone having to do with vampires and Angela didnt want him to see her as that so she left without notice. Now Angela has turned back up in his life and Knox refuses to let her go.

DESTINED MATE was a quick easy read. I kinda wish it was longer so I could enjoy it a little longer. I really enjoyed the main characters Angela and Knox. They were both set in their ways and they butted heads but they had a great passion together which made for some hot moments. I also enjoyed the little dominance fight between the Alpha and the head vampire that takes place. It added some great suspense to the story. Since it is a novella everything happens at a quicker pace but it all flowed smoothly.  Pick up DESTINED MATE to give yourself a quick werewolf/Vampire fix.