Thank you to everyone who entered!!
Prize:Finished copy of BURNED

The Winner chosen by Rafflecopter is.....
Read more »
Posted by StacyUFI at 3:28 PM 1 comment: 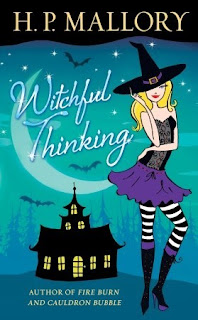 
Jolie thinks she’s seen it all, but life continues to spring surprises. The latest shocker? She’s just been crowned Queen of the Underworld. Jolie may possess a rare gift for reanimating the dead, but she doesn’t know the first thing about governing disparate factions of supernatural creatures. She can barely maintain order in her own chaotic personal life, which is heading into a romantic tailspin.

First there’s sexy warlock Rand, the love of her life, from whom Jolie is hiding a devastating secret. Then there’s Sinjin, a darkly seductive vampire and Jolie’s sworn protector—though others suspect he harbors ulterior motives. As the two polar opposite yet magnetic men vie for Jolie’s affection, she must keep her wits about her to balance affairs of state and affairs of her heart. Overwhelmed, under pressure, and longing for love, Jolie decides it’s time to take charge—and show everyone that this queen won’t take jack.

WITCHFUL THINKING left me feeling confused. I was enjoying how it started out then bam we are in the future and know nothing about the past. The past is slowly revealed to teach us what has happened up until the point we are at and then at the end its bam again and we are in the past before the past. Are you confused yet? Yeah me to.

I have to say my favorite character was Sinjin. He is a vampire that is in love with Jolie and wants to protect her, or at least that was what I got out of his character. Rand is a warlock and the person that Jolie loves, he is super broody and refuses to stick with one emotion for longer then a minute. Just when they BOTH decide that they want to be together and are about to stick with the decision stuff happens that throws that out the window. Jolie was super indecisive. She has no clue what she wants out of the situation she is in. I really never connected with her character and I wish the book wouldn't have jumped to the future as I think those years leading up would have made me understand her more and unfortunately I didn't see that this was book 3 in the series until after I won it and read it or else I would have seen that the back story is in the previous 2 books that are offered as ebooks published by the author. All in all I just never connected with the story and had to force myself to read through most of it.

So my advice? Although I think you could start with book 3 WITCHFUL THINKING, you might be as lost as me so I would recommend you read book 1 and 2 first.

Posted by StacyUFI at 3:04 AM No comments: