UFI welcomes Jennifer Blackstream Author of Before Midnight. Thanks for Joining us!!


All right, ladies and gentleman, tonight is no ordinary match. In one corner, we have the Master of the Night, the Fanged Fury, the vampire! And in the other corner, we have the Hound from Hell, the Furred Ferocity, the werewolf! Let’s meet our fighters…


Brief Overview: Vampires are undead creatures who drink blood to survive. They are nocturnal. Due to their need to get up close and personal with their victims, combined with the vulnerability of sleeping through the day, these creatures have evolved to find it’s in their best interest to entice their food closer and then wipe their victims’ memories to prevent them from raising an alarm. Consequently, the longest surviving vampires tend to be smooth talkers and quite attractive (at least as far as you know, given their hypnotic abilities, who’s to say?).


Origin: Everywhere (though the animal form tends to vary depending on the dominant predator of the area)


Brief Overview: Werewolves are humans who turn into wolves, or human-wolf hybrids, on the night of the full moon (possibly at other times as well, but definitely on the full moon). Due to their animal nature, they tend to roam in packs, which gives them added protection. Their animal nature makes them a bit gruff, but it also makes them loyal and very protective, which creates strong bonds with those who get close to them.


All right, well, I don’t have to tell you that one of the most important considerations in any fight is location. A shark is a fearsome predator until you drop him in the desert, then all of a sudden he’s easy pickings. So, we must ask ourselves, where would a vampire and a werewolf be most likely to meet?


Well, vampires aren’t just going to wander into town and invite themselves in to tea, now are they? After all, when hypnotism relies on eye contact, one has to concentrate on one person at a time, and that’s significantly easier if you lure your prey to you instead of vice versa. Thus, they are not likely to meet, or fight, in town. I can’t think of a reason for a vampire to ask a werewolf for drinks, so the werewolf probably isn’t in the vampire’s lair either. The most likely scenario is for the vampire to encounter the werewolf outside while traveling from one place to another. Advantage: Werewolf.


Now, for the sake of a fair fight, we’re going to assume this particular werewolf was traveling alone. Perhaps he wandered off for a good think, or he’s going to meet a non-wolf lover he doesn’t want his pack to know about. In any case, he doesn’t have his pack to fight with him and he encounters the vampire alone. Since he’s used to fighting as a pack, that will require an adjustment on his part. Advantage: Vampire.


Both werewolves and vampires are territorial, so it’s not hard to imagine they wouldn’t be happy to see one another. Werewolves being more in tune with their animal nature, and vampires being more used to charming their food, we can assume the werewolf would attack first.

Jennifer Blackstream is a psychology enthusiast with both a B.A. and M.A. in Psychology. Her fascination with the human mind is most appeased through the study of mythology and folklore as well as all of Terry Pratchett’s novels.


Jennifer enjoys listening to Alice Cooper, trying new recipes (to which she will add garlic whether it calls for it or not), watching television with her family, and playing with her woefully intelligent four year old son.


Jennifer spends most of her time drinking coffee from her X-Men mug and desperately trying to get all her ideas written down before her toddler can find that all magical button on her laptop to make all her work vanish. 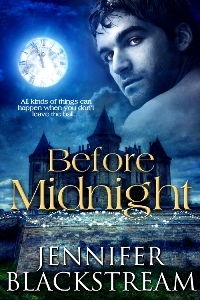 Loupe always dreamed of getting married. She yearned for a caring husband who would take her away from her servant-like existence at home with her stepmother and two stepsisters, a man who would love her forever. Those dreams ended the day she was bitten by a werewolf. Now she’s a mindless beast on the night of the full moon—a condition that forever prevents her from sharing a marriage bed. Not even the attentions of a handsome and endearingly strong prince can convince her that the life she wants is still possible.

Etienne is a prince in need of a werewolf. A werewolf himself from birth, Etienne and his family have protected their kingdom with tooth and claw—literally—for thousands of years. Unfortunately, the spell of a well-meaning witch is slowly turning him human. Only the bite of a cursed werewolf, one who was not born with the beast inside, can save him from becoming human. He has no time for anything that will not lead him to a cure for the cure. Not even the beautiful maiden whose gentle nature soothes his soul can take his mind from his goal.

Love cares little for the best laid plans or the impossible. A grand ball. The stroke of twelve. A magic “slipper.” All kinds of things can happen when you don’t leave the ball…Before Midnight.